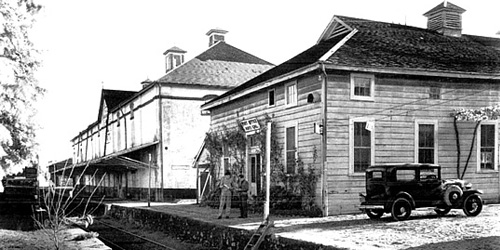 The following overview of the history of Sonoma County was prepared for this website by Marianne R. Hurley, Architectural Historian of the California Department of Parks and Recreation.

Sonoma County boasts scenic vistas, fertile agricultural lands, impressive redwood forests, a sizeable meandering river, and fifty miles of rocky coastline. In addition to these natural resources, there are cultural landscapes that illustrate the county’s historic past with a broad array of properties that mirror the passage of time.

State Highway 101, the county’s transportation spine, services the county seat, Santa Rosa, and the major cities and towns. It follows much of the historic Redwood Highway, the county’s main route from 1915 until 1957. The Redwood Highway in turn parallels the nineteenth century railroad tracks, constructed in 1870. The Northwestern Pacific Railroad, later absorbed into Southern Pacific, connected Sausalito to Eureka through Sonoma County. Passenger trains were discontinued in the 1930s and freight in the 1990s.

Before the European settlement, what is today Sonoma County was inhabited by the Pomo, Miwok, and Kashaya Indians. In 1812, the Russians established the short-lived Fort Ross along the coast north of the Russian River. Further east, the Sonoma Mission was established during the Mexican period in 1823. Shortly afterwards, Sonoma became the county’s first town, a pueblo, under General Mariano Vallejo. During that time, sections of the county were transformed into vast land-grant ranchos, such as Vallejo’s holdings that extended from today’s Petaluma to the town of Sonoma. Most of the construction during the first half of the nineteenth century was adobe and wood. These construction methods drew on the Mexican tradition while incorporating some of the features and floor plans of the Anglo Americans.

After statehood, logging along the coast hills, cattle ranching, wheat and potato farming, and the early development of the wine industry supported the sparsely settled county. During this time, commercial and industrial buildings used local stone or brick, while most residences were built of wood. During the 1860s to the 1890s, Petaluma, at the head of navigation on the Petaluma Creek, enjoyed rapid economic growth that fueled the construction of their downtown with sophisticated iron front commercial buildings and elegant residences nearby.

Later the railroads facilitated the movement of goods and people leading to the establishment of processing plants and factories along the rail lines.

Around the turn of the century, the Russian River developed as a vacation resort, a destination for those in the San Francisco Bay Area. During this time, Santa Rosa also enjoyed an increase in population and importance as the center of

finance and county government. Until World War II, the poultry industry, the processing of local fruit, and the production of hops sustained the economy throughout the county. In 1935, Sonoma County ranked tenth in the nation in overall agricultural production.

During the first half of the twentieth century, many of the stylish buildings were designed by local architects such as Brainerd Jones in Petaluma and William Herbert in Santa Rosa. After World War II, Clarence Caulkins and J. Clarence Felciano worked on many projects in the county. With reference to residential, commercial, and industrial architecture, many of the towns still retain excellent examples of both high style and vernacular building examples from the nineteenth and early twentieth centuries.

Today the southwestern part of the county continues to support cattle grazing and dairy farms. Toward the north many of the ranches and orchards have been replaced with acres of vineyards and thriving winery operations that rival Napa County. Over the years many of the poultry farms, fruit growers, and dairy operations have relocated to the Central Valley or sold their businesses completely. In their place, small specialty farms and ranches now operate sustainable and organic endeavors. Dotting the countryside throughout the county are modern residences where rural homesteads used to be. The Russian River area still caters to vacationers, but on a smaller scale, and the cities along the freeway continue to expand to provide housing and services with new subdivisions, business parks, and strip-mall shopping centers.

With 467,000 residents, the county has doubled its population since 1980. Part of the challenge has been to retain its agricultural and small town character while providing for the livelihood of the expanding population. Related to this is the specific challenge of encouraging new development that complements both the physical beauty of the countryside and the county’s rich heritage.