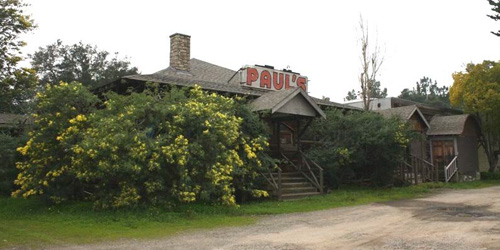 The main building at Paul’s Resort (no longer extant) was constructed in 1908 but saw many changes over the years. Sometime after 1935, when the railroad right-of-way was abandoned, the false front cottages were added within the right-of-way. Sometime after 1944 the dance floor and hotel building was added to the rear of the restaurant. The Ranch house near the near the southeast corner of the property was likely added in the 1950s.

Paul’s Resort opened in 1908 in the midst of the family vacation resort era that occurred in Aqua Caliente, Boyes Hot Springs and El Verano, centered on the  hot mineral  springs abundant in the area of Sonoma County. The boom in resort development was initially aided by the arrival of the Southern Pacific Railroad in Sonoma Valley in the 1880s and rapidly expanded through the turn of the 20th century.

Paul Vannucchi initially operated the Resort that consisted of a cottage complex and dining hall/restaurant. The resort industry in this area gradually changed with the advent of Prohibition in 1919, which resulted in an economic setback for the Valley and its wine industry. The character of the business evolved from catering to the family trade to that of the “high flying” patrons of Prohibition. Beginning in the 1920s, Mrs. Vannucci, and then her son Paul, managed the property through the Prohibition period and the subsequent Depression. The railroad ceased operation to El Verano during the Depression and the tracks were finally removed in 1935. Paul Vannucci also dabbled in dog racing and had kennels on the property, as well as being a local boxing promoter, in keeping with the character and desires of the patrons of that era. He died in 1943.

Subsequently, Paul Marcucci and his wife Eve purchased the complex in 1944 from the Vannuccis, adding a large dance floor and nightclub to the restaurant building. The resort gradually became a center of Sonoma social life, hosting a number of the Valley’s Vintage Festival Balls and returned to its family-oriented roots. Paul Jr. was an organist and piano player and entertained the resort’s guests with his nine-piece orchestra. A business card for the resort from that period called in “the garden spot of Northern California,” featuring “Paul and his electric organ.” It was “famous for its Italian dinners.” The card stated that the resort consisted of cottages, rooms and hotel accommodations, as well as a cocktail lounge, coffee shop and cabaret, in addition to the restaurant. Also offered were opportunities to participate in “golfing, swimming, bicycling and horseback riding, fishing and hunting in the Valley of the Moon.” At some point a large swimming pool was added adjacent to the restaurant/nightclub building.

Late 20th century history. It is not known when the “destination resort” character of the complex changed and accommodations were no longer offered. A Sonoma Index Tribune news article on January 21, 1951 reports that a fire at “Paul’s” had caused
$5500 in damages to the restaurant building and that Paul Marcucci stated that it would be back in business as soon as repairs could be made. The building housing the restaurant continued operating at least into the late 1970s. The building burned in  March 2013.

The destination resort era centered around the hot mineral springs in the North Bay was an important period in local history prior to the construction of the bridges spanning the San Francisco Bay. Then it was an all day journey to the North Bay, first by ferry and then, in early years, by horse-drawn coach, and later by rail, to reach the Sonoma Valley. Once there, vacationers stayed a number of days or more, and engaged in a wide variety of outdoor activities, as well as dining and evening entertainment. There is little evidence left of this period in the region’s history. The hotels and resorts that existed in the Sonoma Valley have virtually disappeared, with few exceptions, such as “Little Switzerland,” which is now boarded up.

Paul’s Resort is significant as a very rare remaining resort from this important era in Sonoma County’s history, as well as the heritage of the Italian community. It is a unique resource which, up until March 2013, retained the buildings, features and vestiges of all the important eras in which it was popular. Most changes to the resort were over 50 years old and a part of its history. Unfortunately, the anchor building for the resort is no longer extant, as the main resort building, which contained a restaurant, hotel, dance  hall and gallery that overlooked the pool, burned in March 2013. This affected the resort’s integrity, which up until that point was very good. The integrity of the resort today is only fair, with the main point of interest being the cottages along the railroad right-of-way.