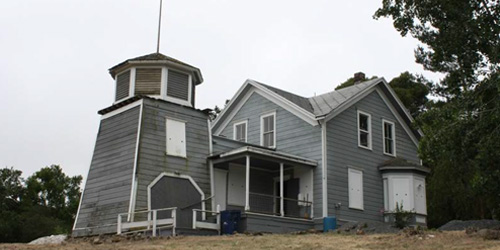 Bennett Valley is named for James Bennett, a squatter in the area who was elected to the state legislature in 1853, defeating William E. Hooker (LeBaron, 1992:21). The historian  Munro- Fraser described Bennett Valley in 1880, shortly after Alexander Benjamin bought his ranch, as follows: Here we have another of the small valleys of Sonoma. It lies south of the town of Santa Rosa, and east of the Santa Rosa valley, has a length of eight miles, and an average width of four miles, while it possesses all the features peculiar to other parts of the county, its soil and climate being peculiarly adapted for the cultivation of fruit and grapes (Munro-Fraser, 1880).

Isaac De Turk’s vineyard in Bennett Valley was the center of wine production in Bennett Valley at this time, and his wine cellar in Santa Rosa had the capacity to produce 300,000 gallons of wine. Other agricultural products of the valley in 1889 included apples and other fruit; hay, wheat, oats and barley; horses, cattle, sheep and hogs (An Illustrated History . . . 1889:227).

In the late nineteenth century the valley boasted a population of about 300 people (An Illustrated History . . . 1889:227). It was also known at this early date for its institutions. The Santa Rosa School District in Bennett Valley, one of the earliest in the county, was attended by 30 children (LeBaron, 1992:166). The Bennett Valley Grange, built in 1873 at what would be the northwest corner of Benjamin Ranch at that time. It was the first grange hall in Sonoma County and one of the first grange halls in the state, an early manifestation of the grange movement and a sign of the importance of agriculture to this area (LeBaron, 1992:77).

The 1877 atlas of Sonoma County reveals that the property Alexander Benjamin purchased in 1877 was previously owned by J. C. Hastain. Alexander Benjamin was born in Lansingburg, New York on January 16, 1834. Both his parents were from upstate New York. In 1837 they moved to Illinois, where the elder Benjamin worked as a farmer, wagon-maker and blacksmith (Gregory, 1911:950). In 1852, when Alexander Benjamin was 16, he accompanied his farther across the plains. En route his father died, but Alexander continued to Jacksonville, Oregon, where he worked for three years as a harness and saddle maker and dabbled in mining. In 1856 he returned to Illinois and bought the family farm from his mother. After two years, however, he moved to Rockport, Illinois, where he worked for fifteen years in the meat packing business and in merchandising (Gregory, 1911:950).

Benjamin traveled to California and settled in Sonoma County in 1872, but did not purchase the property in Bennett Valley until 1877, when he bought the 103-acre ranch for $35 an acre. Sonoma County historian Tom Gregory reported in 1911 that he grew wheat and corn and raised sheep and cattle. After Benjamin died in 1909 his wife ran the ranch, growing grain and raising sheep (Gregory, 1911: 951). In 1910 the US census listed his son William Edward as manager of the farm.

Benjamin married Maria Ducker of Jacksonville, Oregon in 1854. The Benjamins had five children, of which three survived: William Edward (1858-n.d.), who would take over the family farm; Eudora Ann (1860-1863); and Charles Alexander (1852-1877). As can be seen, by the time the Benjamins settled on Benjamin Ranch, however, only one child had survived. Mrs. Benjamin’s parents eventually came to Sonoma County, where they lived in Petaluma until 1854 and then in Rincon Valley. William Edward married and had two children. He was listed as manager of the farm in the 1910 census, living here with his mother and family. The ranch was reportedly sold to the Beck family in 1917, however, and by 1920 William Edward was living in Santa Rosa.

property was sold to the Beck family in 1917, according to a personal interview by Catherine Van Loon with Walt (Waldemar) Beck in 1978 (Van Loon, 1978). Walt’s father Peter Beck was from Denmark and his wife was English. Their four sons, Robert, Rudolf, Waldemar and Peter, were born in California between 1900 and 1906. Prior to buying Benjamin Ranch the family lived in Vallejo Township, where the elder Beck worked as a farmer (US Census, 1900). At the time of the 1920 census, Peter Beck was the head of the household and living on Benjamin Ranch with his two younger sons.

By the time of the 1930 census son Robert Beck (30) was the head of the household and engaged in dairying and fruit growing. His father Peter (70) and his mother Leah (55) were retired. Brother Rudolph (28) was working in a cannery and brothers Waldemar (26) and Peter

(24) were working on the farm. According to Walt Beck’s obituary, Rudolf married and moved away, but the other three brothers remained on the ranch with their mother until her death (“Last of Beck brothers dies at 83,” May 14, 1986). The 1961 Sonoma and Marin Farm and Ranch Directory listed Waldemar Beck as owner of the ranch; it was still 98 acres in size at this time. He still owned the property when the historic survey of the ranch was conducted in 1978.

Catherine Van Loon interviewed Walt (Waldemar) Beck in 1978 in conjunction with preparing the Bennett Valley land use plan. He relayed that the property has been used over the years for growing corn and raising turkeys and beef cattle (Van Loon, 1978). The 1978 historic survey of the property noted that the property was used over time as a farm, dairy and vineyard, and that turkeys, cattle and sheep had been raised on the property, based on an interview with Walt Beck. (Schwartzman, 1978:2).

The property was sold by the Sholten family to Rosemarie and Dieter Rief in 2010.

The Benjamin Ranch house is an excellent example of a modest, late nineteenth century rural Italianate residence in Sonoma County because it is an unusual example and displays excellent integrity. It is typical in size, materials, craftsmanship and its overall simplicity. It is unusual for  its design, condition and integrity, particularly the integrity of its interiors.

The Italianate style was introduced to the Bay Area by east coast architect Horace Cleaveland, who designed the Bidwell Mansion in Chico and William Ralstan’s mansion in San Mateo  County in what was then called English Roman style (Kirker, 1986:69). The style was promoted for rural and ‘suburban’ houses as well through a number of important authors of the time, including Andrew Jackson Downing, and through plan and pattern books. The style became more widespread when it became associated with the Progressive Movement in farming, a time of reform in agriculture in the United States. Books and journals, including California’s California Farmer (later the Pacific Rural Press), were published that provided guidance to farmers in scientific farm and ranch management practices.

The ‘grander’ Italianate ranch houses are characterized by the following features: a cubic or rectilinear form; general overall symmetry; a very low-pitched, hip roof; a cupola, widow’s walk, or other feature accentuating the ridgeline, or square tower in the case of the Italianate Villa style; a central entry and central entry hall extending the depth of the building; a broad or double door, with a transom or lunette above; tall, narrow windows, sometimes within a segmental or round-arched opening, with pronounced crowns or hoods; large chimneys placed either end of the ridgeline, revealing the symmetrical arrangement of public rooms below; deep eaves with regularly-spaced single or paired brackets on deep frieze board; and prominent verandas or a portico with relatively simple porch supports (Morgan, 2004:130). An example in  Sonoma County is the M. C. Meeker residence in Occidental (no longer extant).

High style Sonoma County examples reflect the characteristics described above. They are typically wood buildings and often display one- or two-story canted bays or alternatively, a one- story portico crowned by a balustrade. Buildings without an entrance portico had a full-width veranda, with a classically-inspired balustrade. The smaller, subservient wings had a full-width open porch parallel to the ridgeline, typically located outside the kitchen. Additional architectural detailing that may have been present included wood quoins, round-arched windows with hoods, a lunette or fanlight windows above the main entry door, and four-paneled doors with the upper panels having round arches, and prominent chimneys. Windows typically had two-over-two- light, double-hung sash (Painter, 2008).

Government and Other Documents