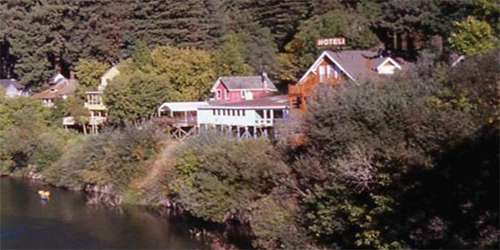 Native Americans settled in what is now Guerneville thousands of years ago. The area later became home to Russian and Aleut trappers. The first Anglo-Americans who settled in the Russian River Valley in 1811 came to take advantage of the large and plentiful redwood trees. From 1865 to the early 1900’s, the logging industry formed the economic base of the region, as evidenced by Guerneville’s former name, “Stumptown.”

Not only did the introduction of standard and narrow-gauge railroads to the area support the logging industry, it also gave rise to tourism, the next large economic base of the area. Resort hotels and subdivisions developed along the rail lines and the river, where visitors enjoyed their summer vacations or fishing expeditions.

The railroad enjoyed continued success until 1935, when it was supplanted by the automobile. The car allowed travelers a greater variety of destinations, which led to the decline of the tourism industry in the Russian River Valley. Periodic flooding over the years also contributed to the area being less desirable as a vacation spot, but tourism is still the largest contributor to the current economy in the area.

The development of Rio Nido was spurred by the construction and subsequent popularity of the Rio Nido Lodge. Built in the 1920’s, this complex of Tudor-style buildings nestled among the redwoods drew such crowds that further development became necessary. Located north of River Road, historic Rio Nido consisted of a small village that developed around the resort. There were a number of commercial uses in the village including a grocery store, barbershop, soda shop, candy store, post office, service station, bowling alley, bar, outdoor theater, and 150 rental cabins. The buildings in the village appear to have been designed with elements similar to those of the Tudor style Rio Nido lodge. Steep gabled roofs with gabled dormers were common and half- timbering decorated the exteriors of some buildings.

The scale and massing of the buildings within the village was somewhat congruous, as most buildings visible in historic photographs were one and one and a half stories with similar roof heights. In the 1940s and ‘50s, development of Rio Nido spread to the south side of River Road and west along the highway. Large one and two-story resort hotels were constructed on the riverside of the highway and other commercial structures were spaced intermittently along the section of highway known as the Rio Nido Strip. Architectural styles varied along River Road, yet orientation , scale, and massing remained relatively consistent.

In the 1860s the Russian River Valley was dense with old-growth forests and rife with opportunity for the logging industry. The success of George Guerne’s “Big Mill” on the Russian River bolstered the growth of the fledgling town of Guerneville. A rail line was built in 1877 to support logging operations, prompting the beginning of the tourist industry.

The purely vernacular and utilitarian buildings of Guerneville in the late 19th century  was the result of hasty construction needed to support a burgeoning population. False fronts and wide porches lent an air of sophistication to otherwise simple commercial buildings.

Homes were constructed with hipped, gabled, and shed roofs, and sometimes a combination of the three. Almost all buildings were sheathed in wide clapboard.

The July 1885 Sanborn map depicts a bustling town oriented around the central rail line (now Highway 116/ River Road). The early 1900s saw the construction of several hotels and other commercial uses. The area south of the rail line was largely commercial due to its proximity to the Russian River and Guerne’s Mill. The area north of the rail line  was almost strictly residential.

Downtown Guerneville was fully developed by the 1950s. The streetscape was a continuous line of one and two-story commercial buildings with party walls. Architectural styles varied, yet the assortment of building types blended congruously as roof-lines were set at consistent heights on each block and storefronts were sited at equal distances from the street with wide pedestrian walks in between. Although infilled over a period of approximately eighty years, the sympathetic development of downtown Guerneville resulted in a visually pleasing mix of architectural styles and sizes.

Monte Rio was developed as a tourist destination in the early 20th century when a  broad gauge rail line was extended west from Guerneville, making it relatively easy for vacationers to travel from San Francisco to the Russian River Valley. Early construction supported the fluctuating visitor population and consisted mostly of resort hotels located south of the Russian River and adjacent to the Guerneville and Cazadero rail lines. The May 1911 Sanborn Fire Insurance Map shows two clusters of predominantly hotel and other commercial structures. To the north of the Guerneville line there was a movie theater, dance hall, bowling alley, bakery, newsstand, candy shop, grocer, restaurant, cigar shop, and a barber.

The Monte Rio train depot was located at the junction of the Guerneville and Cazadero lines. To the south of the Guerneville line, adjacent to the Cazadero line, two major hotels lined the street: Monte Rio Hotel and Hotel Russell. In the early 20th century, downtown Monte Rio was comprised almost entirely of one, two, and three-story commercial vernacular structures with ground-floor storefronts. The seven-story Monte Rio Hotel, constructed in 1901 was the sole exception. Gabled roofs were common and most exterior walls were clad with wide clapboards.

In the 1920s and 1930s, railroad tourism slowed due to the advent of the automobile. Consequently, new development in Monte Rio changed from large-scale resorts to  small residential subdivisions and commercial strips. By the 1950’s, the southern  section of Monte Rio became denser and served as the main downtown area while the buildings north of the rail line virtually disappeared. A bridge was constructed across the Russian River, connecting what is now Highway 116 with the historic center of Monte Rio. Small resort motels and a few small businesses were constructed along Highway 116, north of the Russian River. Historic downtown Monte Rio (Main Street) was comprised of one and two-story vernacular commercial buildings with street-facing gabled roofs hidden behind shaped parapets. Awnings and signage were set at relatively equal heights and buildings were set back equidistantly from the street abutting wide pedestrian sidewalks.

U.S. Department of the Interior, National Park Service.
The Secretary of the Interior’s Standards for the Treatment of Historic Properties with Guidelines for Preserving, Rehabilitating, Restoring & Reconstructing Historic Buildings. Prepared by Kay D. Weeks and Anne E. Grimmer. Website: www.nps.gov/tps/standards/history-of-standards.htm