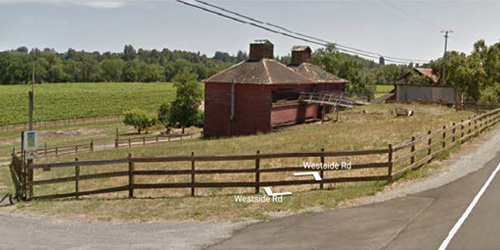 Before Spanish explorers, evangelists, soldiers, and colonists arrived in what is now called California, the descendants of much earlier immigrants from Asia had established stable societies over a period occupying nearly all the land in the state, including present-day Sonoma County. Although their customs, buildings, and diets varied, virtually all the indigenous occupants of California found food and supplies in close proximity to where they lived. The original inhabitants did not rely on food and other goods, natural resources, or specialized labor from distant sources, although they did trade on a smaller scale than the current economy of California. The native inhabitants' society was organized chiefly at the village level; although tribes or nations are now mapped as if they occupied discrete geographic portions of California, these groupings were not centrally organized and there was considerable variation from village to village. Ethnic designations today are chiefly based on language, but indigenous societies did not identify the same way current social organization is understood; today's names for native groups are mainly based on language, although people speaking a similar language did not necessarily follow the same cultural practices or share any political organization. The area now occupied by Sonoma County included people of the Pomo, Patwin, Mi Wuk, and Wappo groups, among others. The Chocuyen people called the valley "Sonoma," meaning "valley  of  the Moon," and took it as their own name after Fr. Jose Altimira conflated the names for the people and the place. By 1870, the census showed the county's Native American population had dwindled to only 85.

From its base in Latin America, Spain sent explorers, then armies and priests, and a number of colonists who mostly affected native populations living near the 21 missions the Spanish government and Roman Catholic Church established. Fr. Altimira founded Mission San Francisco Solano in Sonoma on 4 July 1823 at the site of the village of Huchi. The mission, which operated under Church control for only 11 years before Mexico secularized the missions, raised cattle, farmed grain, and cultivated produce. The town of Sonoma, laid out under Spain's Law of the Indies based on urban planning principles that dated back to the Roman era, grew  up around the mission and became the center of Mexican, Californio, and early American development of Sonoma County.

In addition to newcomers from Spain and Mexico, other important 19th century immigrants to Sonoma County included Russians who made incursions after Alexandr Andreyevich Baranov was put in charge of the Russian American Company's Alaska operations in 1791 and concluded that it required support installations further south because of its arctic climate. In 1812, Ivan Alexandrovich Kuskov sailed the Chirikov into Bodega Bay and established a temporary base he called Port Rumiantsev; he then chose Fort Ross for the permanent settlement, culminating three years of explorations. The following year, Kuskov brought 25 Russians and eight Aleuts to Fort Ross, completing a redwood stockade and establishing a commercial outpost and agricultural operation. The settlement grew in population and activity and expanded geographically over the next three decades with agricultural satellite operations to the south and the east.

The Russians elicited concern and resistance from the Spanish and Mexican governments, which did not recognize their right to colonize the area but were not able to force them out effectively from the limited power base in Sonoma and the distant installations in San Francisco and Monterey. Ultimately, the Fort Ross colony did not fulfill the Russian American Company's expectations and it decided in 1839 to sell it. Before leaving, the Russians made several thrusts inland to the east for agriculture and trade. The last Russian Commander at Fort Ross, Rotscheff, climbed the highest peak in the neighboring Mayacamas Mountains and named it St. Helena after his wife.

By the time the Russians faded, other newcomers from the United States were making an impact along with immigrants from Europe and later Asia. Before the Gold Rush, some of the settlers who originally targeted the Oregon Trail veered south to establish farms on the advice of trappers and others who reported fertile land and a favorable climate in California. By 1845, 23 land grants had assigned almost half the area of Sonoma County to private owners, most of whom subdivided the land and sold it in turn as buyers materialized.

In 1846, Sonoma was at the springboard of the Bear Flag Revolt. With the US and Mexico already at war and John Fremont poised on the border on a "topographical survey," a band of 33 armed Americans took the Mexican garrison in Sonoma by surprise on the morning of 16 June, capturing Gov. Vallejo and then imprisoning him at Sutter's fort in the Central Valley, where they had first gathered. At first they did not invoke American authority, fashioning the  Bear Flag to represent their provisional government, but within days Fremont arrived in Sonoma and took command, followed by Admiral Sloat, who took the capital in Monterey within weeks. In less than a month, the Bear Flag came down in Sonoma and the American flag went up, completing the American takeover from Mexico. Sonoma County remained under American military control until 1849. In August of that year, when the state constitutional convention set the county boundaries, representatives from Sonoma ensured that the Sonoma Valley not be included within the boundaries of Napa County.

An 1850 census put the county population at 561. The county election of 1851 designated a Court of Sessions to administer municipal government; it divided the county into townships including Mendocino township encompassing both the subject property and the present-day City of Healdsburg. Although outside settlement started in Sonoma, Santa Rosa outstripped it in development shortly after Statehood, and in 1854 the Legislature approved a referendum on moving the county seat, which was approved by the voters. Americans had been migrating into California since the Spanish era, and assimilated into the Spanish and Mexican colonization process in many instances before they ultimately revolted in 1846, but after Statehood the migration accelerated.

Count Agoston Haraszthy of Hungary is credited with bringing the first variety grape cuttings from Europe, starting Sonoma's wine industry in 1857, and by 1862, George Miller inaugurated wine-making in Healdsburg. The phylloxera infestation devastated California's vineyards in the 1870s, but by planting grafting European vines onto rootstock native to the Americas, California growers were able to rebound against the aphid-like pest native to the US which had also ravaged European vineyards. In the 1980s, researchers from UC Davis identified a new biotype which was able to feed on some native rootstocks. By 1900, the county had 69 wineries, producing the most of any county in the state. As Prohibition loomed, the industry grew from 21,000 acres of vineyards in 1900 doubling to 42,000 in 1920 with 250 wineries. Although Prohibition decimated wine-making, the county was derided along with Napa County as one of the greatest centers of bootlegging by a state legislator. Julio Gallo began buying Sonoma County grapes in the 1930s and his son Bob started Gallo Sonoma in Healdsburg, producing high-end wine. By the end of Prohibition, the county had only 70 wineries, rebounding strongly only in the 1960s. Vineyards declined to less than 10,000 acres in 1940.

Sonoma County attracted immigrants from outside the U.S., recording 51 Chinese residents 1860, "several hundred" in Sonoma in 1870 working 11-hour days for $1, and 125 in Santa  Rosa in 1880--with racial hatred from some white residents causing many to leave the county in the 1880s. An Anti Chinese League in Santa Rosa sought "removal," and Santa Rosa's Congressman, Thomas J. Geary, was the author of an extension of the Chinese Exclusion Act in 1892, but several Chinatowns developed in Sebastopol in the 1880s. The gunshot deaths of Mr. and Mrs. Jesse Wickersham near Healdsburg in 1886 were popularly blamed on a missing Chinese cook. In the mid-1920s, the Ku Klux Klan displayed its activity and  newspapers reported a Japanese-Caucasian “race riot" in Graton, and in the 1930s there was conflict between Caucasians and Filipinos in the apple orchards in the west county. In the 1870s, Ireland sent more emigrants to the county than any other country. Italians arrived in Occidental in the 1870s and 1880s to find work in lumber mills and stone quarries, and also went into the wine business, with Giuseppe and Pietro Simi of Healdsburg becoming major suppliers for the San Francisco market. The Italian Swiss Colony winery founded in Asti in 1881 accompanied an immigrant community of the same name and Santa Rosa had a Little Italy the following year. In 1923, the Kawaoka family unsuccessfully sued to overturn the California Alien Land Law intended to inhibit Asian immigrants from leaving landholdings to their children and Judge Ross Campbell ruled for the first time in California that apartment owners could refuse to rent to African-Americans. German POWs were housed at a vacant migrant labor camp in Windsor, hired out to local farmers during the wartime labor shortage. The county's chapter of the NAACP formed in 1954.

By 1920, the county population reached 52,000, with the economy still dominated by agriculture, putting the county at eighth in the nation in production. In addition to wine, the county produced eggs, hope, prunes, and apples; these were joined by livestock and dairy industries. The county's markets included Europe by this time. Although Petaluma promoted itself as the "Egg Capital of the World," it lobbied the federal government to levy tariffs on cheaper eggs from China. In 1930, county population rose to 62,000 with farms increasing from 5,700 to 6,000 in the decade. In 1940, county population hit 69,250 despite the losses of the Depression and Prohibition, and surged to 103,405 in 1950. In 1950, the county's first high-tech operation, Optical Coating Lab (OCLI) opened in Santa Rosa, and developer Hugh Codding  began building tracts, developments that heralded the transition of the county away from its agricultural past.