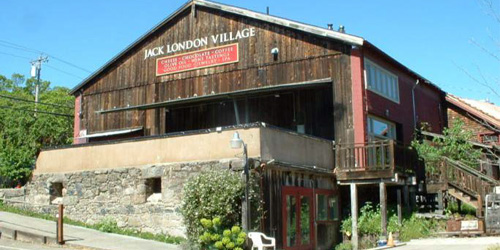 The unincorporated community of Glen Ellen is situated about six miles northwest of the city of Sonoma, the early focus of Euroamerican settlement in this area. Its  history begins in the 1830s when General Mariano Vallejo received a grant from the Mexican government for nearly 67,000 acres of land. Vallejo's rancho spanned the area from the Petaluma River to Sonoma Creek, and from San Francisco Bay to just north of the confluence of Sonoma Creek and Calabasas Creek. The area that would become Glen Ellen was a remote part of rancho, and Vallejo's chief use of the area was logging. To that end, he had a sawmill constructed on present-day Asbury Creek where it joined Sonoma Creek. The mill is depicted on the plat map (Figure 2) submitted as evidence to the U.S. Land Commission when Vallejo sought to prove his claim in 1860 (General Land Office 1860).

Vallejo's mill drew the attention of a young French immigrant who came to Sonoma during the 1850s. Joshua Chauvet eventually purchased the mill and 500 acres of land from Vallejo. While others purchased land in this area in the late 1850s and early 1860s (including Louis Csomortanyi and Charles Stuart), Joshua Chauvet's arrival marked the beginning of a new community that he fostered in many ways over the next 50 years.
Chauvet ran the sawmill for about a year before converting it to a grist mill, having been raised in a milling family in France. He also planted about 75 acres of grapes and began making wine in a small winery he constructed near the mill. Historical records show that Chauvet identified himself as both a miller (United States Bureau of Census [USBC] 1870, 1880) and a winemaker (Sonoma County 1888, 1892). In 1880, he reported growing 120,000 pounds of grapes and producing 9,000 gallons of wine (USBC 1880b). In that same year he his mill produced 1,020 barrels of flour, both wheat and rye, and 175,800 pounds of corn meal and feed (USBC 1880c).

When the railroad extended its reach to Glen Ellen, Chauvet championed the tourist trade, initially setting up a camp for travelers and eventually building the Chauvet Hotel. He was also involved in other community pursuits, which included creating a water system to bring water to his winery and to others in the area, creating Chauvet's Addition to Glen Ellen, and establishing the California Brick and Pottery Company. The heart of present-day Glen Ellen centers on the Chauvet Hotel (13756 Arnold Drive), the Chauvet Building (13740 Arnold Drive), and the Joshua Chauvet House (13760 Arnold Drive), all of which are Sonoma County landmarks.

In 1834, Governor Jose Figueroa granted 44,000 acres of land to Mariano Vallejo, the 27 year-old, former Commandant of the Presidio de San Francisco. He called the grant Rancho Petaluma, and soon began construction of a large adobe house on a rise overlooking present-day Petaluma Valley. Vallejo had been charged with colonizing Northern California, and was sent north to secularize the mission lands of San Francisco Solano de Sonoma the same year that he received the land grant. By 1840, Vallejo had a small sawmill operating at the confluence of Asbury and Sonoma creeks  in the far northern part of the rancho. Within 20 years, nearby Calabasas Canyon was deplete of trees and Vallejo sold the mill to Joshua Chauvet, a French immigrant. Chauvet arrived in California in 1850 and spent a short time working the Calaveras gold fields before turning to baking for the gold camps instead (Gregory 1911). He opened the first bakeries in Mokelumne Hill and Jackson, and was a partner in a general store for a while. In 1853, Chauvet established a flour mill in Oakland, but again the venture was short lived. He arrived in Sonoma County in 1856, and by 1861 had purchased Vallejo's sawmill and surrounding lands.

Chauvet converted the mill to a grist mill, an industry he was familiar with from his childhood, and operated it as such until 1881. In the 1870s, Chauvet planted grapes  and constructed a small winery near the mill. He produced 125,000 gallons of wine in 1880, and the following year constructed a large, three-story wine cellar. The following description of Chauvet's enterprise appears in the 1889 publication, Wines & Vines of California:

The buildings are stone and cement, one of them, the smaller, was built for a grist-mill and so run for many years by water-power. Mr. Chauvet has now storage capacity for 200,000 gallons of wine. The main wine cellar is 50x125  feet, being three stories in height, and containing, besides smaller cooperage, eighty casks holding 1,500 to 1,600 gallons each. He has one tank, the largest in the district, which holds 10,000 gallons. The stem-mer, crusher and press which are run by water-power drawn from a reservoir at an elevation of 150 feet above the building, can crush 60 tons of grapes a day. The elevators, pumps, distillery, etc., are run by steam. Mr. Chauvet made 90,000 gallons of wine last year, of the best quality....Mr. Chauvet, some three or four years ago, imported from France a distilling apparatus of the latest type, called the Egrot, which is said to be the most complete in the county. Last year Mr. Chauvet made 5,000 gallons of excellent brandy, which only needs age to make it a competitor for favor with the best products of the Cognac district [Colburn 1889].

As one of the earliest settlers in the Glen Ellen area, Joshua Chauvet left an indelible mark on the area through his various business pursuits. In addition to the mill and winery, he also operated a water system, opened a hotel in 1906, and subdivided part  of his land to create Chauvet's Addition to Glen Ellen. Chauvet also partnered with C. Hidaker  in  the  California  Brick  and  Pottery Company (Mosier  2008).  Established in 1903, the brickyard was located on Dr. Charles C. O'Donnell's property, and operated until 1909. Bricks produced at the yard were used in such local landmarks as the Chauvet house (1905), the Chauvet Building (1905), the Hotel Chauvet (1906), and the O'Donnell Lane Bridge.

Chauvet died in 1908 leaving his son Henry to run the winery and his other businesses. In 1913, Henry sold the winery to Felice Pagani, who had vineyards in the Kenwood area as early as the 1880s. Little is known of Pagani's experiences during prohibition except that having speculated prohibition would last only a couple of years, Felice was forced to sell property to pay debts incurred from buying large grape shipments just as the law was enacted (Wine Library Associates of Sonoma County 2001).

After prohibition, Pagani renamed the winery to the Glen Ellen Winery and Distillery (Unzelman 2006:36). Son Charles Pagani took over the facility after Felice died in 1926. Under his management, a large, concrete-block winery building was constructed in 1941.

The Pagani family held the property until 1969 when it was sold to Charles Beardsley and David Fritschi. The new owners remodeled many of the buildings to create shops and restaurant space. During their tenure, the newly named Jack London Village became home to many small entrepreneurial endeavors, many with an artistic bent. While renovating Chauvet's stone wine cellar in the early 1980s, the cellar collapsed. Its location is now used as a parking lot.