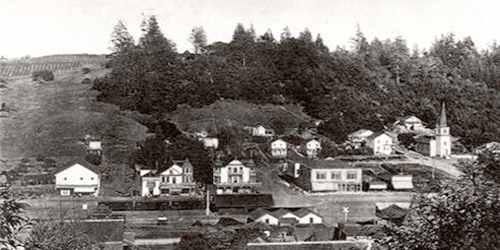 The land on which Occidental lies was never claimed as a Mexican land grant; although it is surrounded by the Rancho Bodega to the west, the Ranch Estero Americano to the south, the Rancho Canada de Jonive to the southeast and the Rancho El Molino to the northeast. Agricultural activities were impractical due to the thick forests and deep canyons in the Occidental area. Known as Summit, Meeker’s, Howard’s Summit, and Howard’s Station before Occidental, the town of Howard’s was the creation of one of the area’s early settlers and principal landowners, William Howard (also known as “Dutch Bill”) who arrived in the around 1849. Howard’s holdings, which composed the town of Howards, included the land north of 3rd Street (at the present day Altamont Bar and Grille). In 1876, Melvin Cyrus “Boss” Meeker arrived in the area; he was successful in acquiring land for timber and began his own steam powered sawmill in 1866 (Hill1997). Meeker, anticipating the economic benefits of the approaching North Pacific Coast Railroad laid out and built the adjacent town of Occidental in a grid pattern.

Meeker and Howard competed for position, each creating their own town. Meeker and his brothers owned the majority of town land south of an east/west line at the Minna Street, and William Howard owned the land north of this east-west line (the block between Front Street on the west, Hill Street on the north and midway between Third and Minna Streets on the south). The town of Howards existing informally through the late 1800s; after Howard’s wife died, he ran into financial problems, lost most of his land, and moved back to San Francisco were he dies in 1899. The thoroughfare of the North Coast Pacific Railroad ran north-south through the center of town; Howard offered free right of way to the railroad on his land. Meeker was instrumental in helping to construct the Occidental Methodist/Episcopal Church in 1876, as well as the Union  Hotel in 1879.

In 1876, the North Pacific Coast Railroad Company came to the Bodega Bay region. The narrow gauge railroad ran from Point Reyes Station on Tomales Bay, along the eastern side of  Tomales Bay to Tomales, and Valley Ford, Freestone, Occidental,  Camp Meeker, Monte Rio, Duncan Mills, and Cazadero. The depot in  Occidental, initially called Howards Station, was a wood framed gable roofed building with vertical wood siding divided into a ticket office, waiting room, and baggage room. The train began running to Occidental in 1876. The train provided transportation of wood products from the surrounding lumber mills in the area, such as cut cord-wood and tanbark, wine, charcoal, as well as produce (potatoes, hay, rice and fruit such as apples and peaches) and dairy products (butter) to San Francisco. The  North Pacific Coast Railroad helped to create the town of Occidental. The railroad provided income through businesses providing food, lodging and services to railroad personnel and tourists, as a commercial transport to goods to San Francisco and Marin County, and as transportation of tourists to the region. In 1902 the North Pacific Coast Railroad was purchased by the North Pacific Coast Company who changed the name to North Shore Railroad, and in 1907 the railroad was purchased by the Santa Fe and South Pacific Railroad who changed the name to Northwestern Pacific Railroad. In 1930 due to competition with automobiles and trucking companies, the railroad service was stopped, the railroad was discontinued, and the tracks were removed. The Occidental Depot was demolished  circa 1937.

In 1876 Cyrus Meeker commissioned the construction of a 29-room hotel to coincide with the arrival of the North Pacific Coast Railroad. The hotel is named Summit House, but its name is later changed to the Altamont Hotel. The hotel is one of the earliest businesses in Occidental. In 1879 Amelia Jones constructed a two story building, the Union Hotel and Saloon, on land sold to her by William Howard. In 1924, the Altamont Hotel was destroyed by a fire which burned approximately two blocks on the east side  of Occidental between Second and Minna Streets. The Union Hotel was damaged by the fire, but not destroyed (Hill 1997).

In the 1880s, some additional industries outside of lumber became profitable in Occidental, including tanbark, the manufacture of charcoal, shingles, grapestakes, pickets and posts. Common occupations for local Occidental residents included ranching, farming, dairying, viniculture, and fruit-growing.

In 1886, the original Taylor Building was constructed by William Freeman Taylor, a  Nova Scotia native who ran a grain warehouse and livery stable on adjoining lots, as a general merchandise store with living quarters above. The building was destroyed by fire in 1906 and was rebuilt by Taylor in a replica of the original 1886 building.

There was not substantial change in the community of Occidental into the first few decades of the 1900s. Some additional residential and commercial buildings were constructed in the 1920s and 1940s. When the railroad was discontinued in 1930, the era of development and prosperity in Occidental ended.

Trussell, Margaret Edith
1960 Settlement of the Bodega Bay Region. Thesis submitted in partial satisfaction of the requirements for the dress of Masters of Arts in Geography at the University of California. Unpublished document located at the Santa Rosa Public Library History Annex, Santa Rosa, CA.