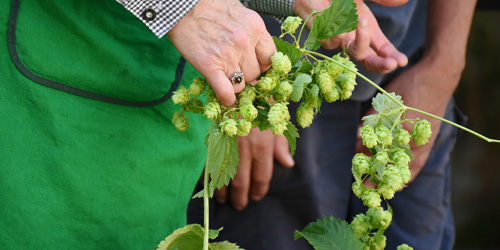 Ale was originally made without hops, while beer was the name for the same drink made with the added ingredient of hops, a plant said to have originated in Egypt. The flower of the hop plant, scientific name Humulus lupulus, is used to counter the sweet ingredients of beer with its bitter, astringent taste. The blossom of the female hop plant, which measures about 1-1/2" in diameter and is called a "cone" for its shape, is made up of scales or bracts growing from a stem. The unfertilized cone is used in hop-making today. A yellow, granular secretion called lupulin  which  forms  on  the  surface  of  the  bracts  provides  the  flavor  sought  by brewers. Sonoma county hops traditionally were "seeded," by growing a male vine in each row of female plants.

The hop plant, which is perennial and deciduous, grows vines each season. The vines were originally trained on poles, before the trellis system used in California was devised. The trellis system consists of rows seven to eight feet apart, with vines trained on strings, hung from wires spanning poles that are set up in the field annually, allowing the vines to grow to a height of 15-20 feet. Although the vines are now harvested intact and processed centrally by machine,  during the decades in which the subject property was built and used, the cones were picked by hand from the vines. Pickers pulled the vines, removed the hops, and placed the hops in baskets, emptying the full baskets into sacks. The burlap sacks weighed 75-80 pounds each. Pickers wore full sleeves and pants to reduce scratches from the vines. Horse-drawn wagons or trucks took the hops from the field to the kiln.

Hops must be dried so that they can be stored until used in brewing. Originally, the cones were air-dried but this method was not practical for large-scale production. American hop production was originally influenced by practice in Britain, where oast houses were devised to dry hops. These brick buildings contained three rooms: one for storage of green hops, in the center an oast room (oast is derived from an Indo-European word that means "burn") with a brick heating oven with a floor of lath strips about two and a half feet above it in which the hops were dried, and a cooling room.

Hops, picked with a moisture content of 75%, must be dried to a content of 10-14% to keep them from spoiling. Hop sacks were emptied onto the drying floor of the kiln to a depth of 18 to 36 inches, where they were heated for 8-20 hours. Workers used wood rakes to circulate the hops on the drying floor so they would heat evenly; sulfur was added to bleach the hops. The floor consisted of lath strips with spaces that allowed warm air from below to circulate. A thin cloth over the lath prevented the hops from falling through the gaps in the floor. Once the hops reached the correct moisture level, they were moved to a cooling room, and then to the baling press. The bales, about 18 by 24 inches and five feet long, weighed 200 pounds. Buyers sampled a six-by-ten-inch sample cut from every tenth bale to ensure consistent quality, smelling for mold and judging whether the color was correct.

Hops are picked during a season that typically lasts three to four weeks, usually beginning in late August.32 In hop-growing regions, this typically meant a substantial amount of labor was required during a concentrated period, even though wages were low. Growers established camps for the pickers, many of whom returned annually and socialized after each day's long work. Some migrants spent the season in campgrounds on the Russian River. Locally, pickers included ranch hands, Pomo Indians from Mendocino County or the coast, San Francisco longshoremen, immigrant groups from Italy, Mexico, Japan and Germany -- and even German POWs during World War II. In 1894, the Sonoma County Tribune reported that 50 Native Americans had arrived on wagons and horseback, beckoned from Mendocino County to pick in Sonoma County because "the majority of the hop plantations up there are not going to be picked." A 1928 newspaper article set the harvest labor requirement for Healdsburg at 2,500 and explained that much same labor pool would pick in Mendocino County and the Central Valley before coming to Healdsburg, where the work paid 1 cent per pound36 -- and did not exceed 1-1/2 cents through the 1930s. The low pay and migratory nature of the work led to social tensions and labor disputes, the most famous of which, the Wheatland Hop Riot, occurred at the Durst Ranch in the Sacramento Valley in 1913. Four people lost their lives during a strike organized by the International Workers of the World. Although the hops industry  made  growers and the brokers to whom they sold their crops (often several years in advance) wealthy, it was a very unpredictable business because prices were global, set by distant harvests. In 1881, the price was $1.10 per pound, but in 1885, it declined to $0.06 per pound.