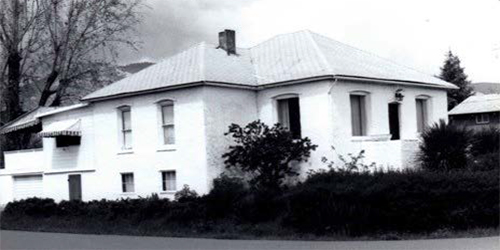 The building at 98 Shaw Avenue is situated on lands first inhabited by the Wappo Indians and later granted by Mexican Governor Alvarado to John (Juan) Wilson in 1837. John Wilson was a Scottish-born sea captain who came to Bodega Bay in 1830 to deliver cargo destined for Sonoma. Wilson quickly became entrenched in the  community of Sonoma by marrying General Vallejo's widowed sister, Ramona Carrillo de Pacheco, and filing papers to become a Mexican citizen. After the Bear  Flag rebellion in 1846, Wilson initiated the process of having his grant, which he had named "Rancho Los Guilicos," recognized by the United States government. After a few years of slow response from the government, Wilson sold the entire grant-all 18,883 acres-to William Hood and William Pettit.

Hood and Pettit had both come to what is now Sonoma County during the gold rush as merchants selling provisions to the gold rush miners. The partners received title to the grant in 1866. Recognizing the great financial potential of the land, Pettit quickly bought out Hood's share of the Rancho. In May 1868, however, Hood lost title to all but 1,000 acres when he defaulted on a loan.

In 1887, N.W. Griswold became enamored with the area during a visit to a local hot spring and bought 100 acres. He then incorporated the Sonoma Land & Improvement Company, which bought 2,500 acres of land, including what is now the town of Kenwood. The conglomeration anticipated the arrival of the railroad and set about planning a proper railroad town that would maximize the potential of such an economic boon. The group hired George P. Aston to lay out and survey a traditional grid pattern town, focused around a park and a separate plaza. They tried several names for the infant town Rohnerville , Los Guilicos, South Los Guilicos before settling on Kenwood.

In 1888 the Southern Pacific Railroad Company incorporated the Santa Rosa and Carquinez Railroad Company, which ran through Kenwood, stopping at the stone Romanesque railroad depot that still stands in Kenwood today. Kenwood thrived tor the next fifty years, until the trains ceased running in 1941. What had once been a thriving "Boom Town" with a myriad of stores, parks, civic buildings, and neighborhoods slowly dwindled into a sleepy little village.

Today Kenwood is characterized by a handful of commercial properties clustered along Highway 12 (Sonoma Highway) between Warm Springs Road on the south and Randolph Avenue on the north. The town spreads out west of the highway contains a variety of modest one and two-story houses on modest lots. Its location equidistant.

between Santa Rosa and Sonoma, in the midst of vineyards and scenic hills, has made Kenwood a destination popular for both primary and secondary residences.

The lot containing 98 Shaw Avenue is on the southeast corner of what was originally known as Block 8 (Lots 9 & 10) on the 1887 Kenwood map. The block was near the northwest corner of the town's grid, adjacent to a planned park. Peter Maroni purchased the empty lot in October 1896, nine years after the town's initial development.

Maroni had immigrated to the United States from Italy in 1882, at the age of 22. He was naturalized as an American citizen in 1888 and married a local Sonoma girl, Rose Gamberina, in 1889. The couple moved to Kenwood, where their first child was born in 1890. Five more children were born to the couple in their Kenwood home. Peter Maroni was an active and prolific stonemason during this period, working at the  Annadel Quarry, Titania Quarry and his own Maroni Quarry (later renamed the Coutts Bros Quarry). He was part of a large 1880s influx of Italian immigrants, many of whom were stone masons coming to the area to work the basalt veins in the hills of Sonoma  County.

As his success grew, Maroni bought vacant lots in Kenwood through the end of the nineteenth century, including the project area. Based on newspaper accounts from the Sonoma Index-Tribune, his own residence was erected by 1890 when it burned and  was immediately rebuilt. Given that he did not buy the lots on Block 8 until 1896, it can be deduced that he was buying and developing real estate on speculation. In 1911, he transferred title of the property to his wife Rosa, indicating that they stiII owned the property and may have been out leasing it. By 1903, City directories  and advertisements  for  Maroni's had moved to Santa Rosa where there was a tight-knit  and active Italian immigrant community.

The rubble stone and brick masonry structure that Maroni built at 98 Shaw Avenue is a modest dwelling that only hints at his talent as a stonemason. Examples of his other documented work in Sonoma County include the St. Rose Church (Santa Rosa), the Western Hotel (Santa Rosa), Wolf House (Glen Ellen), Hop Kiln Winery (Healdsburg), and the Railway Express Station (Santa Rosa). He also may have been involved in the construction of the Kenwood Railroad Depot in 1887 based on its similarities to the Santa Rosa Railway Express Office.

Kenwood contains very few masonry structures. Besides 98 Shaw Avenue and the Railroad Depot, there is a one-story house at 9325 Clyde Avenue (at Cypress) and another at 204 Warm Springs Road. Despite the abundance of stone in the surrounding hills, its use in residential construction was relatively rare. Most of the stone went into making paving blocks for San Francisco and for use in civic and commercial buildings around Sonoma County.

Presently the 18" thick stone walls are severely damaged from the 8/24/2014 earthquake event known as "2014 South Napa Earthquake". As noted above the stone walls are cracked. 5 of the 6 stone walls have large vertical cracks. Cracks on the north, west, and east walls extend through the full wall width. West wall has been displaced outward about 6". A large portion of the east wall top has crumbled away revealing attic and roof framing. The north wall adjacent to the aforementioned addition is severely cracked however. the structural damage is concealed behind a loose layer of stucco finish.

Post-earthquake evaluation recorded on the "ATC-20 Rapid Evaluation and  Assessment form" was performed by an engineer sometime in December of 2014 (form was not dated). The engineer recorded the following:

At this time the building condition is "UNSAFE" and "..property is unsafe to occupy". In accordance with FEMA requirements per the ATC-20 report, placards stating "AREA UNSAFE" have been posted. The report also recommends the URM walls be removed.

Peter Maroni came to a tragic end on June 24, 1919, when the car he was riding in collided with another car at the corner of Lincoln and Morgan Streets in Santa Rosa. Maroni suffered head trauma and a crushed spine and died soon after the crash.  He was 59 years old and at the peak of his career. He left his wife, Rosa, and six children. Rosa kept the property at 98 Shaw Avenue in Kenwood until her death in 1932, whereupon the property passed to her children, all of whom had settled in Santa Rosa near their extended family.

The property changed hands several more times, until 1962 when George Partis purchased the house for $11,000. He was the first to occupy the house as his primary residence for several decades, as the records show a variety of tenants rotating through the property before him. The style and materials (e.g. concrete block, aluminum windows) used on the wing added to the north side of the house suggest that Partis may have constructed the wing shortly after purchasing the property in 1962. The building permit history of the property shows an addition being completed in August 1966, which may have been the porch. When George Partis added his second wife, Jessie, to the title in 1970, the house was described as a two-bedroom residence  worth.

$15,000. The couple lived in the house until 1986 when they sold it to the current owners, John and Elizabetta Figliolini, and moved to southern California.