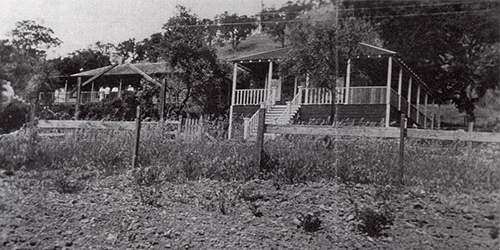 Glen Ellen is a small town of around 800 residents, located along Sonoma Creek in Sonoma Valley, approximately six miles northwest of the city of Sonoma and thirteen miles southeast of Santa Rosa. The first known inhabitants of the Glen Ellen area were Native American members of the Coast Miwok, Pomo, and Winton tribes, who intermingled in Sonoma Valley. Evidence of these peoples’ activity in Glen Ellen can  be found in the sites of summer villages and work areas in the valley, and winter camps on the side of the mountains.

Glen Ellen’s first Europeans settlers were of Mexican heritage. The area was at the far northeast corner of General Marianno Vallejo’s vast Petaluma land grant. Vallejo was a Californian-born Mexican military commander, rancher, and eventual politician who was instrumental in the transition of “Alta California” from a province of Mexico to the U. S. state of California. In 1839, Vallejo constructed a sawmill along Sonoma Creek, in the area that would come to be Glen Ellen, and used it to process redwood and Douglas  fir. The mill, still extant, was sold to French-born Joshua Chauvet in the 1850s, who converted it to a grist mill. Chauvet constructed a general store here, which became a stage coach stop between Sonoma and Santa Rosa. Additional early settlers included Charles Justi, who operated steamboat service between San Francisco and Sonoma and established a ranch in the area; and Charles Stuart, who named his land the Glen Ellen Ranch after his wife, eventually giving the area its current day name. As the town grew, large numbers of French and Italian natives settled in the area, attracted to the climate that mimicked that of their homeland. These settlers worked in the wine industry as well as general agriculture and stone masonry.

Rail service came to Glen Ellen in the 1880's, and the town became a popular summer vacation destination for residents of San Francisco. Some residents turned their private homes into informal summer resorts, and small purpose-built hotels and resorts were built, including the Mervyn Hotel (1885), Dr. C.C. O’Donnell’s health resort (1891), and the Chauvet Hotel (1906). Guides to the area’s resorts were published by rail  companies to boost ridership. A typical listing reads, “Fifty yards from the  depot; situated between two creeks, plenty of shade, fishing and bathing. No bar; home cooking, can accommodate 40.” Also around this time, the State Home for Feeble Minded Children was established in Glen Ellen in 1891, the campus of which remains in operation as the Sonoma Developmental Center. The township of Glen Ellen was officially established by the Sonoma County Board of Supervisors in 1901.

In 1905, Glen Ellen saw the arrival of its most famous resident, the writer Jack London, who purchased a 1,000 acre ranch on the eastern slope of Sonoma Mountain. London, who had already achieved fame when he moved to Glen Ellen, brought wealthy and famous guests to the area, and spent lavishly on the property, which is now a National Historic Landmark. London died at his Glen Ellen ranch in 1916.

The era of rail tourism waned in the 1920s as auto tourism increased. Glen Ellen became a town of permanent residents, many of whom were the 3rd and 4th generation of original settlers. The rail lines that brought the town its brief period of rapid expansion were removed in the 1940s and the steel repurposed in the shipbuilding effort of World War II.6 The mid-1960s saw the arrival of another well-known writer, Hunter S. Thompson, who was drawn to Glen Ellen due in part to London’s former residency  there. In a 1967 article in The Cavalier, Thompson described the remote and rowdy character of Glen Ellen, which still conveyed Jack London’s era.7 However, Thompson noted encroaching tourism, which presaged the contemporary renewal of tourism in  Glen Ellen. Glen Ellen has seen the recent establishment or reestablishment of many wineries, restaurants, inns and bed and breakfasts, in keeping with the overall increase in wine industry tourism in Sonoma Valley.

5131 Warm Springs Road appears to have been constructed c. 1916 by Pierre and Anastasia M. Larinie. Pierre Larinie was born in France in 1871 and his wife Anastasia (née Bouscat) was born in 1867, also in France. The couple married in 1897 and had two daughters, Marie and Martha. In September 1906, the family emigrated from France to San Francisco, where Anastasia’s brother J. B. Bouscat was already established. At the time of their arrival, Pierre Larinie was listed as a farmer, although once settled in San Francisco he was employed as a cook in a French laundry. From 1906 through 1916, the Larinies lived on Mendell Street in what is now the Bayview neighborhood of San Francisco. This area supported a large French population during that time, in part due to a concentration of French-owned tanneries. By 1917, the Larinies were no longer listed in the San Francisco city directory, and it appears that they had resettled in Glen Ellen.

In 1920, the United States Federal Census records Peter (Anglicized from  Pierre) Larinie and his wife Marie A. (possibly “A.” is Anastasia) as operators of a summer  resort in Glen Ellen (although there is no street name given, the location is listed as “west Glen Ellen”) (Figure 16). By this time, the Larinie’s daughter Marie had married John Pierre Cambou, another French immigrant, who was born in 1896 and arrived in the United States in 1909. John Cambou, who went by Johnny, and Marie had a son Ernest in 1918, and in 1920 were both employed as attendants at the nearby Sonoma State Home (now the Sonoma Developmental Center). The Larinies and the Cambous were one of many families regarded as part of a “French Colony” in Glen Ellen, who gathered regularly for large parties and celebrations with French food, music, and dancing.

By 1930, the Cambous and the Larines were all living on Warm Springs Road, although it appears that they may have been operating the property as a summer resort less formally at this time, if at all: Peter Larinie was not working in 1930, and John Cambou was employed as a farm laborer. In 1932, Peter Larinie died in Glen Ellen, after which time Marie (Anastasia) Larinie moved to Santa Rosa. It appears that Johnny Cambou may have begun operating the property at 5131 Warm Springs Road, which he called Rocky Terrace, after the death of his father-in-law.

Johnny Cambou is remembered to have operated Rocky Terrace for decades. Cambou was a flamboyant personality who hosted notoriously rowdy parties at his resort. The resort was popular with French families, as well as the French consulate from San Francisco. Lore holds that the resort hosted industry magnates, including John Black of Standard Oil, movie stars including Ina Claire, and nobility including Prince and  Princess Romanoff, all of whom were served Cambou’s homemade French cuisine, which included the traditional French frog’s legs, collected from a reservoir down the street from the resort. In the recollection of Cambou’s daughter-in-law Jean Signorotti, Cambou sometimes hosted dinners for over 30 people, and people came from all over the Bay Area to enjoy the exceptional dinners and hospitality of Cambou’s Rocky Terrace.

It is not known precisely when John and Marie Cambou ceased operating Rocky Terrace. Resort business in Glen Ellen generally waned after rail service stopped, and then declined more steeply during the Depression and World War II. Directories of  Santa Rosa rural routes list the family here though the 1950s, although by 1961 they lived in Santa Rosa where John Cambou was employed by Wells Fargo. In the 1970s the property was owned by another French family, Louis and Adrienne Rigal, who had formerly owned the Edward Hotel in San Francisco. It appears, from later permit records, that the resort was operating as a multi-unit apartment complex, and then ceased operation for some time. In 1983, the property was surveyed as an  “old resort”, with the intention of conversion to a bed and breakfast. In 1984, new owners Luis and Lorraine Pasini, of nearby Kenwood, CA, applied for and were granted permission to convert the vacant property, which was noted at that time to  have included four residential units in the single family dwelling and four residential units in the gust building, to a bed and breakfast. The buildings were renovated so that the residential building was again used as a residence by the owners, and the guest  building included six rooms. The parking structure existed on the property at this time. The bed and breakfast, called the Glenelly Inn, opened in 1986.

In 1987, the property was purchased by Gray B. Mattox, who continued to operate the inn. Mattox renovated the basement level of the residential building to include two  rooms for personal use, and in 1989, applied to convert these rooms to guest use. The application was rejected because the area had been rezoned rural residential. Mattox appears to have successful in a 1990 application to rezone the property, which is currently zoned recreational and guest serving.

In 1990, the property was owned by Ingrid Hallamore and her daughter Kristi Hallamore Jepperson. Under their ownership, the small pool was installed in 1990 and the two contemporary cottages were built in 2002 (Figure 17). The current owners undertook further renovation of the property in 2011, including the conversion of the first story of the residential building to guest services. These renovations included the partial reconfiguration of the primary (south) façade of the residential building to remove the front stair and entry, and installation of several new windows, creating a continuous band of windows at the breakfast room. At this time, the residential building’s shingle siding was removed and replaced with a horizontal wood siding to match the guest building. Window and doors were replaced, generally in kind, at the guest building. No changes were made to the footprint of any buildings during his renovation. The inn now includes twelve rooms.

Thompson, Hunter S., “Nights in the Rustic” published in The Cavalier, August 1967, accessed online at totallygonzo.org/gonzowriting/rare-articles on March 23, 2015.

All U. S. Federal Census information and Santa Rosa City Directory information was accessed at www.ancestry.com

Permit files for 5131 Warm Springs Road, including building and planning permits, were accessed at the Permit Sonoma.