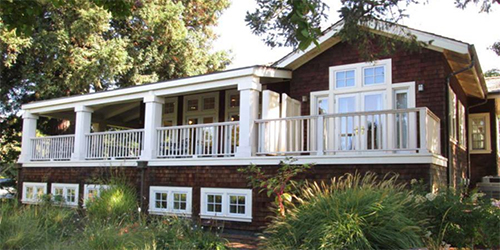 The beginning of viticulture in California dates to the Spanish and Mexican mission period with the first vineyards planted for use in making sacramental wine. Later, wine for general consumption was also being produced by the missions using grapes that became commonly known as “Mission grapes.” The mission grapes grew well but generally resulted in wines notable only for their blandness (although those from the northern missions were more highly regarded). The humble beginnings of Sonoma County’s wine industry can be traced to General Mariano Vallejo’s continuation of the Sonoma Mission vineyards after secularization in 1834, from which he produced about 540 gallons of wine a year (Pinney 1989:259).

As settlement spread throughout California, so too did the cultivation of grapes for wine as well as for the table. In Napa County, George Yount is credited with planting the first grapes in the Napa Valley in 1838. His vines came from cuttings taken from General Mariano Vallejo’s vineyard in Sonoma County, and were planted on Yount’s Caymus Rancho, which includes present-day St. Helena.

French winemaker Jean-Louis Vignes imported vines from Bordeaux in 1833, establishing the El Aliso vineyard and winery in what is now downtown Los Angeles. Vignes is considered by many to be the founder of California’s wine industry, while others credit the more flamboyant Hungarian immigrant, Agoston Haraszthy, with that feat. Haraszthy was an unswerving proponent of California wines and championed vineyard development in northern California.

In the early 1860s, Harasthy traveled abroad to study winemaking in Europe's finest regions. He also collected hundreds of thousands of select vines, representing hundreds of varieties. On his return to the United States, he authored a treatise describing the best winery practices; doing everything on your own estate in order to guarantee quality at every step was one of them [Western History Productions 2006].

Among his accomplishments, Haraszthy established Sonoma’s Buena Vista Winery in 1856 where he had extensive caves dug into the hillsides for storage. He used hillside planting and promoted non-irrigated vineyards. But perhaps the greatest contribution Haraszthy made to the fledgling California wine industry was his enthusiasm and belief in northern California’s wine future.

Southern California was the first notable grape-growing and wine making region in California, but by the late 1870s, Sonoma and Napa counties outpaced the southlands as Italian immigrants brought their expertise to the region. The 1880s witnessed many acres of land put to vineyard that were previously used for orchards and dairy lands. In the 1891 county history it is written:

From Napa City to Calistoga there is a constant succession of vineyards and wine-cellars, showing plainly the great importance of the industry to the county. From Yountville, nine miles above Napa City to a point about midway between  St. Helena and Calistoga, the whole country is given over to the vineyards, St. Helena being the center of production. The many massive stone wine cellars, many of them architecturally very fine, is a great surprise to the stranger [Lewis Publishing 1891].

While that account is certainly romanticized, data regarding the growth of vineyards and wine production in Northern California were presented by Thomas Pinney (1989) in his book on the history of American wine making. Using figures from California State Board of Agriculture, Pinney shows that from 1860 to 1890, “…Los Angeles's share of the state's total [gallons of wine] sank from near two-thirds to less than a tenth; in the same span the Bay Area counties saw their share rise from little more than a tenth to near two-thirds, an almost symmetrical exchange” (Pinney 1989:311).

In 1920, the California wine industry at both ends of the state was dealt a terrible blow when the United States Congress passed the 18th amendment to the Constitution  which forbid the manufacture, sale, or transportation of intoxicating liquors. While many states had already enacted statewide sanctions, the federal government’s actions virtually ended all wine production, with the exception of the few winemakers who were able to obtain permits to make wines used for medicinal and sacramental purposes.

Ironically, while wine production plummeted, the state saw a dramatic increase in the number of acres put to grapes. State records show that in 1920, there were 410,000 acres of grapes growing statewide: in 1930, there were 570,000 acres of grapes with only 200,000 of those being wine grapes (Peninou 1998:264). The growers switched from premium wine grapes to grapes that traveled better as Prohibition created a new demand for these grapes in the east.

California grape growers planted hearty, thick-skinned grapes that could be shipped easily and used for small-scale and home wine making. Much of the California wine-grape crop was shipped to Chicago and New York in newly developed refrigerated boxcars. The grapes were bought right off the train by wholesalers, who resold them in immigrant neighborhoods.  The  home-made wine was then distributed to smaller cities and towns, where it was sometimes called "dago red" [Muscatine, Amerine, and Thompson 1984].

Prohibition lasted until 1933, disrupting not only the legal production of wine but also having a far reaching affect on consumers. Pinney (1989:442) describes the daunting task vintners faced after 1933:

The immediate question for the winemakers looking over the desolate scene left behind by the Dry years was to educate the American public in the renewed use of wine. If they were older Americans, they had forgotten what the civilized use of wine was; if they were younger, they had never known. …a hard and bitter labor faced the American winegrowers: their vineyards were debased, their wineries decayed, their markets confused by arbitrary and unpredictable barriers, and  their public ill-instructed and corrupted by the habits of a hard-drinking bootleg style.

To those factors affecting California’s wine industry, add the depressed economy of the 1930s and the onset of World War II. Before Prohibition, California had more than 700 bonded wineries. That number dropped to 140 by 1933 and in 1960, nearly 30 years after the repeal of Prohibition, the number of wineries was just 271 (Peninou 1998:264). It took another 25 years (in the mid- 1980s) before the number of wineries reached pre- Prohibition levels.

The Pagani Brothers Winery is situated on land that was once part of the 18,883-acre Rancho Los Guilicos granted to Juan (John) Wilson by the Mexican government in 1837. Wilson, a Scottish sea captain, was married to the widow Ramona Carrillo Pacheco, a member of the prestigious San Diego Carrillo family, which had close ties to General Mariano Vallejo, the Mexican comisionado in charge of founding the Pueblo of Sonoma. The Wilsons held land grants in other parts of California and never lived at Los Guilicos. In 1849, the rancho was sold to William Pettit and William Hood. Shortly thereafter, Hood bought Pettit's interest in the rancho. Hood and his wife, Eliza, were plagued with financial problems, and in 1868, the majority of the rancho lands were sold to pay off notes held in Hood’s name. By 1898, Thomas Hopper owned 1,205 acres of the rancho, and in 1900 115 acres were acquired by Walter E. Allen, including the property that now contains the Kenwood Winery (aka Pagani Brothers Winery). Amedeo Pagani bought the property in 1905, and in 1906 established the Pagani Brothers Winery.

Amedeo and John (Giovanni) Pagani immigrated to the United States from Fenegro, Italy. Amedeo arrived in 1889 and John in 1892 (U.S. Department of Commerce and Labor 1908; U.S. Bureau of Census [USBC] 1900). Early in the 20th century  the brothers lived with cousins in Glen Ellen. After Amedeo acquired the Kenwood property, the brothers the resided on it jointly with John renting from Amedeo (USBC 1910, 1920). Theirs was among the first Sonoma Valley wineries (Lynch 1997), and like the others they were hit hard by prohibition. During the "dry" years between 1920 and 1933, the family continued to farm though no records were found indicating what they were growing. Their 44-acre property was assessed at $4,710 in 1922 (Farmers Directory Company 1922). Amedeo died in 1927 and John in 1933, the year prohibition ended. John's son Julius continued operation of the winery for another 35 years after their deaths. With Julius's death in 1969, the Pagani Brothers Winery was sold to John Sheela, and Mike and Marty Lee.

The new owners changed the name to Kenwood Winery, and transformed the nature of the operation. While the Pagani's ran the winery, their wine was sold in bulk for blending with other wines, and could be purchased by the bottle at the winery (Practical Winery & Vineyard 1988). The Pagani's "jug wine" establishment was transformed by Sheela and the Lee brothers who increased the winery's output significantly. To accommodate the change, several new buildings were constructed and a modern infrastructure was created. Their wine was sold under their own label, and Kenwood Vineyards became internationally known. In 1996, the Korbel Brothers acquired a 50 percent stake in the property, and by 1999 they owned the whole of the business. Pernod Ricard purchased Kenwood Vineyards in 2014.

Pinney, T.
1989 A History of Wine in America: From the Beginnings to Prohibition. University of California Press, Berkeley.

United States Department of Commerce and Labor
1908 Declaration of Intention of Amedeo Pagani. Department of Immigration and Naturalization, Washington, D.C.