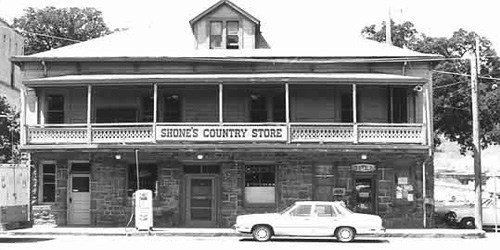 Settlement of the Sonoma Valley began when Mission San Francisco Solano, the last and furthest north of the missions, was established by Father Altamira in Sonoma, at the northeast corner of Sonoma Plaza. Shortly before secularization of the missions, which occurred in 1834, Mexican Governor Jose Figueroa chose Sonoma Valley for settlement and assigned the task to General Mariano Guadalupe Vallejo, who received vast grants of land in return for his services. Vallejo established the Pueblo de Sonoma next to the mission and proceeded to encourage settlement by awarding large land grants throughout what is now Marin and Sonoma Counties  to prospective settlers.

In 1839 General Vallejo established a sawmill at the confluence of Asbury and Calabazas Creeks about one half mile south of where Glen Ellen proper is today. This marked  the beginning of Glen Ellen, but it would be several decades before the small town took the form that it exhibits today.

Glen Ellen is named after the wife of early Sonoma Valley settler Charles V. Stuart, who came  to California in 1849 and settled in the Glen Ellen area about 1869, where he “began one of the earliest essays at viticulture in Sonoma County.” Glen Ellen in fact got its start in the vicinity of Stuart’s ranch. Stuart named his ranch Glen Ellen, a name that was also given to the post office, which was originally just north of his ranch on Captain Justi’s property, also on Dunbar Road. The post office eventually moved south to what is now the Glen Ellen townsite and Stuart renamed his ranch Glen Oaks to avoid confusion. Both the town and the ranch still hold these names today.

One of earliest histories that mentions Glen Ellen and the surrounding countryside was written by Charles A. Menefee in 1873. At this time Menefee was writing a history of the four counties  of Napa, Sonoma, Lake and Mendocino. He called Sonoma, “one of the most important and interesting counties in the State.” He recounted the history of the town of Sonoma, discussing its importance before California became a state, but noted that after the county seat moved to Santa Rosa, the town languished. He continues: “But this stagnation only belongs to the town, the valley [Sonoma Valley] is quite different. It is now probably one of the finest  vineyard sections in the state.” At this time Sonoma Valley was additionally known for its wheat crops, as was the entire county. Sonoma Valley would continue to be the most important center in Sonoma County for wine production.

The 1874 Hand-Book and Directory of Napa, Lake, Sonoma and Mendocino Counties also provides insight into early Glen Ellen at the time. This directory lists just seventeen residents associated with the Glen Ellen post office. The listed residents were primarily farmers and vintners, and included the proprietor of the Half-Way House on Santa Rosa Road; Joshua Chauvet (who lists his residence as in Sonoma); Captain Charles Justi, the postmaster, who lived in the Justi Adobe on Dunbar Road; J. A. Poppe, whose place of business at this time was on the east side of the Plaza in Sonoma; and vintners C. V. Stuart, Dr. J. B. Warfield, and J. A. Williams. A map showing land ownership patterns in the vicinity of Glen Ellen at this time can be seen in Thompson’s 1877 Atlas of Sonoma County.

Prefacing the Directory, the author L. L. Paulson describes his trip through Sonoma County in, “A General Description of Sonoma County, Incidents of Travel, Adventures, Etc.” He first arrived at the small community of Donahue by steamer from San Francisco, and records his impressions there. At the time of his trip there were 20,476 people living in Sonoma County. It was agriculturally rich, and its populace was considered well educated, due in part to the 102 schools throughout the county.7 Like the earlier author, he first described the town of Sonoma. Traveling from Sonoma to Santa Rosa by stage, along what would be roughly the route of Highway 12 today, east of Sonoma Creek, the author notes the farms of the Carriger brothers and William Hill, among others: “On all sides are elegant residences, surrounded by shade trees, fruit trees, vines and flower gardens . . . They all have large vineyards, fruit orchards and flower gardens; their places are kept in excellent order, and are among the most beautiful we have seen in our travels. Here we see growing side by side in the open air, oranges, apples, almonds, plums, figs, cherries, and other tropical and semi-tropical fruit . . . The vineyards contain almost every quality of grapes, from the finest imported to the more common Mission variety.”

Glen Ellen got less press, however: “. . . a two house town, where the post office and the necessary saloon are under the same roof with a shoemaker shop (doing a good business?) next door; on we pass more vineyards, more vineyards and vineyards again, having seen but very few grain fields since leaving Sonoma, and come to the farm of William Hood . . .”

Historian J. P. Munro-Fraser devoted just one paragraph to the young Glen Ellen in his 1880 history of Sonoma County. He noted the location of Captain Justi’s Glen Ellen post office (on what is Dunbar Road today, noting that Glen Ellen was “. . . only a mail stop, but is surrounded by some of the most experienced wine growers in the county . . . A radius of six miles, with Glen Ellen for a center, would, in the opinion of many, include the finest grape-growing section in the State of California.” This is no less true today than it was in 1880.