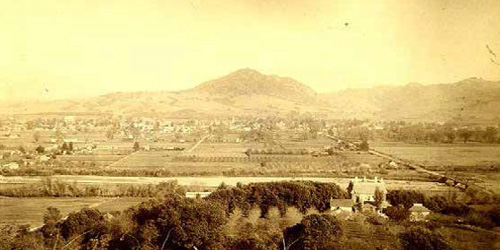 Dry Creek Valley is located in northern Sonoma County, north of Healdsburg and south of Geyserville. It is about twelve miles long and two miles wide, located on both sides of  Dry Creek, so-named because it goes dry in the summer months. Dry Creek is fed by many streams: Fall/Grass Valley, Peña, Wine, Grape, Crane, and other small creeks on the west; and Dutcher and others on the east. Dry Creek flows into the Russian River just south  of Healdsburg. The agricultural lands consist of the rich bottomlands and the slopes to the east and west. The headwaters of Dry Creek now lie beneath the waters of Lake Sonoma, created  by construction of the Warm Springs Dam by the U.S. Army Corps of Engineers in 1983.

The history of Dry Creek Valley, Healdsburg, and Geyserville is like that of many other such valleys in California’s coastal regions: first occupied by Native Americans, then traversed by explorers and trappers, granted as Mexican ranchos, settled by Euro-American immigrants (primarily from the Eastern U.S.) in the 1850s, and finally developed into rich agricultural family farms, orchards, and vineyards.

For the purposes of this report, no overview history of the archaeology and ethnography of the Native American populations of the area has been presented. The evaluated resources were all associated with Euro-American occupation and the long and important history of Native American use of the land is beyond the scope of this project. The group most closely associated with the Dry Creek Valley, however, were the Southern Pomo, and, as elsewhere in California, diseases spread by the newcomers rapidly decimated the indigenous population, beginning with the smallpox epidemic of 1837, so that only a remnant few were left to greet the immigrants. Of the estimated 10,000 Pomo villagers residing in the Healdsburg area in the 1830s, only 75 were recorded in 1903, and reduced to 12 when recorded in 1916 (Hoover et al. 1990:482; Healdsburg Cultural Resources Survey [HCRI] 1983:3).