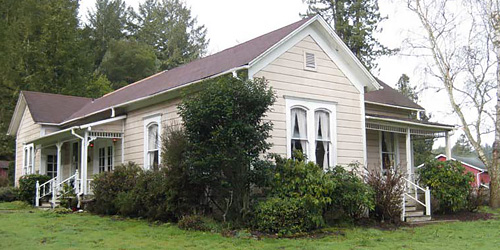 Prior to 1850, Freestone was established in the vicinity of three ranchos/land grants: Ranchos Estero Americano, Canada de Pogolimim and Canada de Jonvie. General Vallejo and his family were given generous portions of land in Sonoma County by the Mexican government. In 1835, General Vallejo, through his brother-in-law John Cooper, invited three sailors James McIntosh, James Dawson and James Black to settle on a portion of this land in the Freestone vicinity. The land around the Freestone area was forested with giant redwoods, pine and other lumber trees, and was also good for farming. The three men formed a partnership to build a saw mill on Salmon Creek, and subsequently in 1839 James Black alone was granted the land from the Mexican government. A legal battle over the land ensued between McIntosh and Dawson. Dawson applied for and received the Canada de Pogolimi grant, and his widow Antoinia Caseres Dawson received a patent for the same (Thompson 1877). In 1847 Antoinia Dawson married Frederick G. Blume (a German immigrant); Blume became the manager of the Rancho Pogolome. In 1844 James Black married Mexican Mary Augustinia Sais, became a Mexican citizen, and moved his livestock out of Rancho Jonive and built an adobe dwelling near Freestone. The saw mill on the Jonive was completed and ran until 1849 by McIntosh, James Black, Thomas Butters, William Leighton, and Thomas Wood. In 1849, all the lumber from the mill was sold to F.G. Blume, and the men left for the gold mines in the foothills of California.

In 1849 Jasper O’Farrell (1817-1875) exchanged his Nicasio Rancho in Marin County for Rancho Jonive in Sonoma County, and later purchased the adjoining Rancho Estero Americano. O’Farrell, an Irishman, surveyed San Francisco, Vallejo, Benicia, Martinez, Petaluma, and San Rafael as well as lands to the north including areas of the Estero Americano (Minassian 2004). O’Farrell called this property “Analy Township.” He married Mary McChristian, and they initially lived in the adobe dwelling erected at the foot of Jonive Hill near Freestone by the former owner James Black. The adobe and redwood constructed house was built in 1843, and was damaged and fell down in the 1906 earthquake. O’Farrell built a large house on his property at the northeast end of Freestone Valley known as Jonive Hill, now known as O’Farrell Hill. In 1859 O’Farrell was elected to the State Senate to represent Sonoma County. By 1860, O’Farrell fell on difficult times and had to sell off most of his Marin and Sonoma county land. In 1870, he lost his home in Freestone and moved to San Francisco.

Freestone was appropriately named for a quarry of sandstone in the area, which was worked and used for building purposes. A March 22, 1861 Sonoma County Journal article stated that three men were getting out stone from a quarry near Freestone that

operated from time to time, to ship to San Francisco. The 1867 assessor’s map of Freestone (one of the earliest assessor’s maps that Sonoma County possesses) shows the town of Freestone with two main property owners, F.G. Blume and Thomas  O’Grady. Jasper O’Farrell is listed as owning five hundred and sixty acres in the Freestone Valley (Minassian 2004). In 1849, Freestone had a saloon with a small attached store (built by Ferdinand Harbordt), and in 1850 a larger store was constructed by S. Bruggerman. In 1853 a stagecoach line started operation with Freestone as one  of its stops. Also in 1853, F.G. Blume built a two-story hotel on 12 acres of operated by Dobs, W. H. Sailhardt built a blacksmith shop, and Thomas O’Grady built a second blacksmith shop. The Freestone Inn was located on 12 acres of land. In 1864 Blume sold the hotel and land to Thomas O’Grady. The Freestone Inn burnt down on September 27, 1861.

In 1876, the North Pacific Coast Railroad Company came to the Bodega Bay region. The narrow gauge railroad ran from Point Reyes Station on Tomales Bay, along the eastern side of  Tomales Bay to Tomales, and Valley Ford, Freestone, Occidental,  Camp Meeker, Monte Rio, Duncan Mills, and Cazadero. The depot in Freestone was located ½ -mile north of Lower Freestone. Hollis B. Hinds, a farmer who owned land near O’Farrell Hill, built Hind’s Hotel, a thirty-two room hotel near the new depot in Freestone in August 1876, just before the railroad reached Freestone in September.  The train began running to Freestone in September 1876, and Hinds’ Hotel did a good business providing lodging for railroad workers (Sonoma County Journal, August 25, 1876) (Trussell 1960). The train provided transportation of wood products from the surrounding lumber mills in the area, such as cut cord-wood and tanbark, as well as produce (potatoes, hay, rice and fruit such as apples and peaches) and dairy products (butter) to San Francisco. In 1902 the North Pacific Coast Railroad was purchased by the North Pacific Coast Company who changed the name to North Shore Railroad, and in 1907 the railroad was purchased by the Santa Fe and South Pacific Railroad who changed the name to Northwestern Pacific Railroad. In 1930 due to competition with automobiles and trucking companies, the railroad service was stopped, the railroad was discontinued, and the tracks were removed.

In the 1870-1880s a one-room school house was constructed in Freestone on a bluff near Salmon Creek for the educational needs of the children within the community. The prominent Greek Revival style building was used as a school house until circa 1958, and today it is used as a private residence. In 1881, F.G. Blum deeded property for the construction a Methodist Church in lower Freestone, Reverend C.G. Milnes was the minister. This building no longer exists, and a second Methodist Church was built in 1907 also located in lower Freestone near the present location of Freestone Vineyards, and was demolished in 1960s.

By the 1880s, lower Freestone (the area west of the intersection of Bodega Highway and Bohemian Highway, and upper Freestone (the area around the present day Freestone Store) had developed into a community with residences and businesses such as a hotel, blacksmith shops, stables, saloons, a butcher shop, a saw mill, general stores, a tannery, a school house, church and a post office (Minassian 2004). There  was not substantial change in the community into the first few decades of the 1900s. A few additional residential and commercial buildings were constructed in the 1920 and 1940s. When the railroad was discontinued in 1930, the era or development and prosperity in Freestone ended.

Trussell, Margaret Edith
1960 Settlement of the Bodega Bay Region. Thesis submitted in partial satisfaction of the requirements for the dress of Masters of Arts in Geography at the University of California. Unpublished document located at the Santa Rosa Public Library History Annex, Santa Rosa, CA.