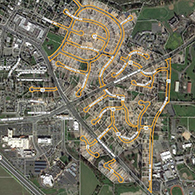 The county has adopted a OnePave Program (“OnePave”) intended to provide better-quality, longer lasting roads and facilitate rebuilding efforts specific to the fire damaged areas of Larkfield-Wikiup, identified in the OnePave Map (PDF), where a high concentration of utility and other infrastructure work for individual rebuilding projects is anticipated to result in extensive trenching in the area’s roadways. As a whole, this activity would result in a patchwork of piecemeal trench paving, resulting in degraded, poor-quality road surface and reduced pavement longevity.

Accordingly, the County adopted OnePave where, in exchange for waiving existing re-pavement requirements (“Standard 219”) and allowing compliance with an alternative, cheaper standard for temporary patching (“OnePave Standard” (PDF), permittees subject to OnePave would pay the County a portion of the savings they would incur. The amounts collected would be designated for a County-initiated, final, one-time pavement once most trenching activity is complete.

For trench work in the OnePave area, encroachment permit customers will pay a fee that would reflect the difference in surface material costs between repaving to normal (full) Standard 219 specifications and the reduced costs of repaving to the less-extensive, alternative OnePave patching specification (“OnePave Fee”). The OnePave Fee calculation will be done on a per-project basis to tailor the OnePave Fee to account for each project’s variables.

The net result will be one of the cost savings of OnePave and will constitute the OnePave Fee. See OnePave Permitting Procedures for detailed information regarding the calculation of the OnePave Fee.

The OnePave Fee is in lieu of (and, less than) costs the encroachment permit customer would ordinarily incur to satisfy existing retrenching requirements. Labor, time, and contractor mobilization costs will also be saved by not having to repave to full Standard 219 requirements. In that the OnePave Fee does not attempt to capture these savings and instead is only based on the savings derived from using less materials, customers will realize many more benefits by virtue of OnePave. Also, in that the fee is based on market rates for roadway surfacing materials, the amount to be collected reflects a portion of the costs the County will incur to ultimately repave over those same trenches. As such, this proposed fee would recover the reasonable cost to perform this service and provide this benefit to the fee payers.