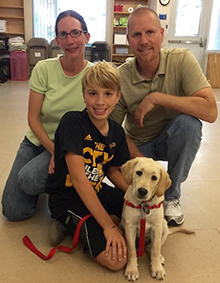 Mike Holdner is a Mark West Estates Block Captain and group rebuild organizer. His family lost their home in the 2017 Sonoma Complex Fires, along with 178 property owners in Mark West Estates (MWE). Mike is spearheading the effort for a group rebuild project with 76 of these property owners. In this conversation with Permit Sonoma, Mike shares his experience with the fire and rebuilding, along with advice for other fire survivors going through this process.

Permit Sonoma: Can you tell me more about your background and anything you’re comfortable sharing about your experience with the fires?

Mike Holdner: My wife and I bought our house in MWE in October of 2000. We were married in May of 2000 and this was our first house. April and I met at Cal Poly SLO and are both Mechanical Engineers. We both worked for HP/Agilent in Santa Rosa. April transitioned to a stay at home mom after our son Thomas was born in 2006. I am a project guy. I work on projects for Keysight that take two to three years to complete. I do house and personal projects that use my hands-on as well as analytical skills. In general, if I do not have a project to work on, I get bored. I hate sitting around. 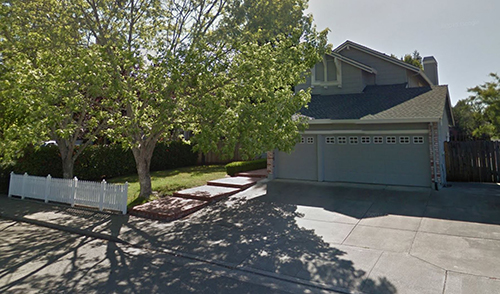 Our experience with the Tubbs fire was right out of a disaster story. We went to sleep on Sunday night at 9:30 with the windows closed and the AC on. We had no idea there was a fire coming our way until we received a reverse 911 call at 1:25 AM. April and I got up and started packing a few things on our bed in the master bedroom, then the power went out. We grabbed flashlights from the nightstands, she got dressed and then went to wake up Thomas. I started to pack a bag for myself, when I heard things hitting the window. I opened the blinds and saw that the fire was coming out of the canyon and cinders were hitting the house. I yelled “April, we have to go, we have to go now!” The three of us went downstairs with April’s bag, I left mine on the bed. She asked what we should take, I said wallet, keys, cellphone. I did grab a big laptop off the kitchen table, then out the front door to my truck in the driveway. By then a sheriff deputy was going through the neighborhood on a loudspeaker telling everyone to get out. I put April and Thomas into the truck and went back in for our 4 month old puppy. She was in her kennel in the family room which has a large slider looking east up the canyon. I grabbed the dog, turned to look, and there were flames all over Wikiup Heights and Fountaingrove. I put the dog in the truck with April and Thomas and then checked on my neighbors on each side to make sure they were up and heading out. I did a visual check on the neighbors across the street, then got in the truck and drove to my mother-in-law’s condo across from Cricklewood. There was a burning pickup truck in the middle of the Mark West Springs and Old Redwood Highway intersection that brought home the point that this was deadly serious.

We arrived at Gwen’s condo to find she had already evacuated and left her garage door open. I closed the door, made sure the front door was locked, and left to head south on the freeway. The smoke was thick southbound, we should have gone north. We were crawling along with other traffic, just south of the LBC when flames started pulsing across the freeway. The redwood trees on the west side of the freeway burst into flames and we all hit the brakes. A few cars out at the edge of visibility just disappeared into the flames, they had to keep going. We stopped and did a three point turn to head back north in the southbound fast lane with our hazards on. Traffic was chaos, as we were going the wrong way on the freeway and the smoke was so thick. We made it back to the River Road interchange, went under the overpass and had to do a U-turn across the freeway to take the southbound off ramp. By then law enforcement had shut the freeway, we must have slipped in just in front of that.

We drove to the Park and Ride next to the PG&E substation and we could see flames across the freeway in what we assume was our neighborhood. We could also see flames to the south of us on the west side of the freeway. I tried to get my best friend on his cell and house line in Coffey Park, but no answer. We made the decision to go get them up and drove into Coffey Park on Barnes Road and to my friend’s house by Schaefer Elementary. The smoke got even thicker and visibility was tight when we got to Jon’s. We told him to get his wife and kids the hell out of there and that we could not stay, we had to keep moving. They left 5 minutes behind us.

After that, we drove to Rohnert Park to a co-workers house. We still had not heard from Gwen, April’s mom, by morning. I spent all day Monday driving to shelters and checking with hospitals before we found her late on Monday at Memorial in the ER. She had fallen after evacuating and fractured her pelvis, shattered her elbow, and broken her foot. She had surgery on Thursday of that week and spent a month in a rehab facility. Fortunately her condo did not burn and also my friend Jon’s place survived. Both were within three houses of the burn line.

Permit Sonoma: What are the main milestones that you’ve accomplished in the rebuilding process? 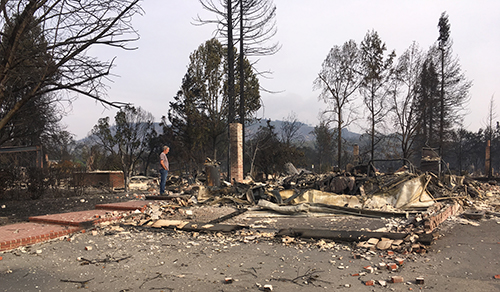 Mike Holdner: I have been a busy man since the fires. Immediately after the fire I started thinking about getting a developer to rebuild the neighborhood as it was done the first time. We had 5 floor plans in our neighborhood with three elevations for each. Why not rebuild it the same way? I figured out who built our homes in the late 80’s (Presley Homes) and who bought Presley (William Lyon Homes). I contacted Lyon Homes and talked with their VP for Northern California. He gave me a lot of advice on the phone and offered to meet with myself and a few other homeowners in person to give an insider’s perspective on a fire rebuild. We ended up selecting Stonefield Companies for our group rebuild, drawing from their experience with multiple post-fire group rebuilds projects in Southern California. The milestones flowed from there:

Permit Sonoma: Would you describe your experience working with the County?

Mike Holdner: My experience with the County has been nothing but positive. Working with Supervisor James Gore and his office has been extremely helpful. The Block Captain committee shortens the communication path between my neighbors and results in very fast issue resolution and question answering. With the Resiliency Center, my main interaction has been through and with Stonefield. Stonefield has had met several times with Permit Sonoma and the Resiliency Center and has nothing but good things to say. They are very impressed. Personally, I could not be happier with the County response to the fires.

Permit Sonoma: What has been the most surprising elements of the rebuilding process?

Mike Holdner: For me, the most surprising thing has been how much everyone has pulled together to support each other. Every day I see examples of how caring and supportive my friends, neighbors, employer, and fellow Sonoma County residents are. Makes me very proud to live here.

Permit Sonoma: What kind of contact have you had with other fire survivors? 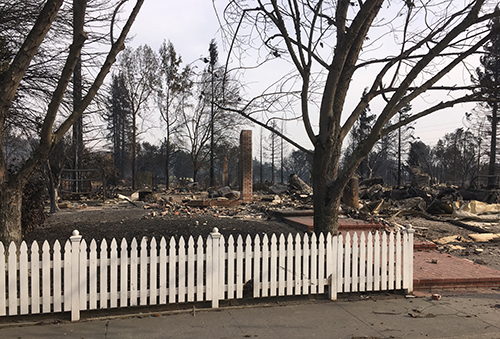 Mike Holdner: With the position I have as a Block Captain and the leader of the MWE group rebuild, I am in contact with fellow fire survivors every day both in person and electronically. I am on our Facebook page constantly. I have posted all my contact info online and interact everyday via email, text, and phone. Some of it is build related, some is insurance advice, some is just support for people having a tough time. I am not normally an extrovert, more of the introverted engineering type. But, this has been my time to step up and give back.

Permit Sonoma: Do you have any specific resources that you recommend for fire survivors?

Mike Holdner: The Sonoma County Recovers website is the County and City of Santa Rosa’s official fire recovery website, and specific County rebuilding information can be found on the County’s rebuilding website. United Policyholders is a nonprofit that helps people navigate their insurance claims. And we worked with Friedemann Goldberg, who provided probono services to review our contract.

Permit Sonoma: What advice would you give to others that are going through the rebuilding process?

Mike Holdner: My advice would be to keep setting attainable short-term goals while keeping an eye on the long term. This is not a race and you need to do this at a pace that can fit in as much of a normal life as possible. Also, you are not in this by yourself. Reach out to your neighbors and friends, both fire victims and not. Sometimes you need to spend time with “normal” people to see that a normal life is still out there. Sometimes you need to hang with your fellow fire survivors to have time with people who can relate. Doing this by yourself is too much of a burden to bear.