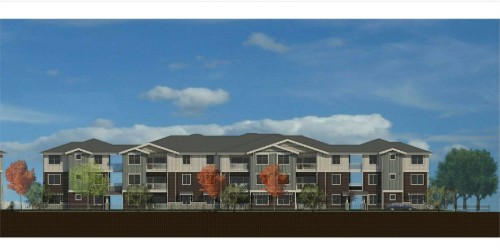 At the October 2, 23019, meeting of the Design Review Committee, the Committee granted final approval to the project. Approval documents can be found in the project file (see below).

The proposed project is a 100 percent affordable, 96-unit apartment building consisting of four three-story buildings and one one-story community building on a 4.11-acre parcel. The project would utilize the County's density bonus program, which allows up to a 100 percent increase over base density, to achieve the proposed density of 24 units per acre. Under the Density Bonus Program, 40 percent of units are required to be affordable to low- and very low-income residents, which the project would exceed as all units will be affordable to low- and very low-income households. The site is zoned R3 (High Density Residential), 13 units per acre density), which allows the proposed use. The project would be served by public water and sewer.

The project is located within the City of Santa Rosa’s voter-approved Urban Growth Boundary. It is within the County’s Urban Service Area, is not within a Community Separator, and it is located on land zoned for housing in both the County’s and the City’s General Plans. The City is involved in review of the project, as the proposal requires joint City/County Design Review Committee approval and a Utility Certificate from the City.

The proposed project is a permitted use in the R3 district, and requires joint City of Santa Rosa and Sonoma County Design Review Committee approval.

See Documents, below, to download the Mitigated Negative Declaration.

The Committee reviewed the project and granted final approval. Approval documents can be found in the project file (see above).

The Committee granted the project preliminary design review approval, and concurred with the Director's adoption of the Mitigated Negative Declaration, at the June 26 public hearing.

The Committee reviewed and provided comments on the project at the Conceptual Design Review meeting.

Submit questions or comments to the project planner (see below).

Sign up for email updates on Permit Sonoma's Housing Initiatives

Public Notice for June 26 Public Hearing and Adoption of MND