We all know how important water is to sustaining life and maintaining a healthy environment but clean water is sometimes taken for granted. We need clean water to stay healthy and we prefer to drink a glass of purified water instead of turbid, dirty water. In a similar manner, aquatic life and organisms are healthier living in clean creeks and rivers instead of polluted waterways. A healthy environment promotes healthy lives… ours and theirs. For example, excess sediment in creeks and rivers occupies spaces in gravel where fish lay their eggs for protection from strong currents and predators. The absence of those crevices leads to a declining fish population.

How Precious Is Water?

Earth’s water is approximately 97% ocean saltwater. The other 3% is contained as freshwater in glaciers and ice caps, groundwater, lakes and rivers, soil, and the atmosphere.

We actually have less than 1% of Earth’s water available to us for all the planet’s uses. Lack of clean water and population growth contribute to limited water supplies and increased treatment costs. Please use water wisely.

Moist air rises to the sky from Earth’s surface and water bodies cool and become water vapor, which condenses to form clouds. This moisture is contained within clouds until it returns to the surface as precipitation in the form of rain, snow, or hail. Precipitation falls to the surface and infiltrates the soil or flows over the ground as runoff. Groundwater and surface runoff flows into streams, rivers, and the ocean. As water bodies become heated by the Sun, moisture returns to the atmosphere through evaporation while plants return water to the atmosphere by transpiration. And the cycle continues.

A watershed is an area of land that catches and drains precipitation to a common body of water such as a river, lake, or ocean. Watershed boundaries are usually designated by high points of natural terrain such as ridges or hilltops and include natural and artificial drainage systems such as ditches and storm drains. For example, rainwater may land on a hillside but not get absorbed into the soil thus creating runoff. This runoff travels downslope to a low point then enters a drainage system (maybe a swale or storm drain) and travels downstream where it’s discharged to a major water body (a lake or a river). 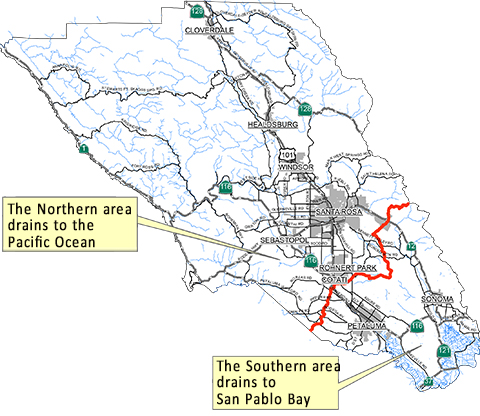 Download a bigger version of the Watershed Image (PDF: 332 kB)

The County of Sonoma has a responsibility to both Water Boards and a Storm Water Management Program has been established to protect and enhance the water quality of our watersheds. It is a program designed to be used in cooperation with the public and governmental agencies to reduce the number of stormwater pollutants entering our waterways.

Non-point source pollution is caused by pollutants of varying origins and occurs when stormwater runoff picks up and carries debris, chemicals, dirt, and other pollutants into our storm drain system. Anything that enters our storm drain system is discharged untreated into the waterbodies we use for swimming, fishing, recreation, and drinking water.

Some common pollutants found in storm drains and creeks include motor oil, yard clippings, fertilizers, pesticides, milky water from paint, soapy water from car washing, eroded sediment, concrete by-products from construction projects, and litter. Because all runoff cannot be captured and treated like sewage, the best prospect for cleaner water is to prevent runoff from becoming polluted in the first place.

A storm drain system is designed to prevent flooding by collecting surface runoff through various inlets (like curb openings and parking lot grates) and conveyance systems (like ditches, swales, and pipes) and then discharging it to a natural waterway (like a creek or river). Storm drains are also known as storm sewers. The water in the storm drain system does not receive any treatment. Anything located outside that can be washed away by water has the potential to enter a storm drain system and our waterways. This includes motor oils in driveways, pet waste on lawns, and soapy water from car washing.

A sanitary sewer system collects and transports waste from indoor plumbing fixtures to treatment plants. Private septic systems also collect waste from indoor plumbing fixtures but the contents are contained within the owner’s property. Septic systems should be maintained on a regular basis and should not be discharged over land or into a storm drain system.