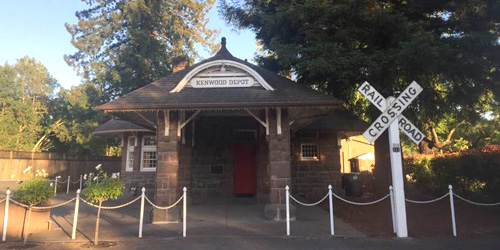 Sonoma County, the most northerly of the nine counties in the San Francisco Bay Region, is located along the Pacific coastline about forty miles north of San Francisco and the Golden Gate Bridge. The County is just over 1500 square miles, making it the largest of the nine Bay Area counties.

Sonoma County is bordered by the Pacific Ocean on the west, Marin County and San Pablo Bay to the south, Solano, Napa and Lake Counties to the east, and Mendocino County to the north. Because of the geographic configuration and topography of the North Bay area, transportation linkages to adjacent counties are limited to a few routes. The U.S. Highway 101 Freeway is the major north/south route, connecting the County to San Francisco and Marin to the south and to Mendocino on the north.

Sonoma County's 1500 square miles include a diverse mosaic of landforms, environments, and human settlements. The broad, flat Santa Rosa Plain, which lies between the Sonoma Mountains on the east and low coastal hills on the west, contains the cities of Santa Rosa, Rohnert Park, and Cotati. The sparsely settled western margin of the county, along the Pacific coastline, includes the redwood and mixed conifer forests of the Mendocino Highlands in the north and rolling oak studded hills, dairylands, and coastal prairies in the south. The Mayacamas Range forms the eastern boundary of the county. Along with the Sonoma Mountain range, it encloses the Sonoma Valley or "Valley of the Moon," a scenic valley which extends from near Santa Rosa southeastward to the City of Sonoma and the marshlands of San Pablo Bay. In the north, the Mayacamas Range and Mendocino Highlands enclose the farming regions of Alexander and Dry Creek Valleys. In the far northeast, the remote interior of the Mayacamas Range contains the Geysers geothermal steam field.

Sonoma County has a particular interest in coordination of land use, infrastructure, and environmental protection with other local, state, federal, and tribal governmental jurisdictions within the County. GP 2020 is generally compatible with the plans of the nine cities, and with plans or policies established by other governmental agencies. Areas for future expansion of the cities were coordinated with the various cities and with the Local Agency Formation Commission, which is responsible for setting city boundaries and spheres of influence. Although GP 2020 does not regulate development within the cities, it is applicable to lands within their spheres of influence. In some instances, the policies of the plan establish larger "areas of interest" for cities, in order to provide for their review and comment on proposed County actions.

GP 2020 also considers the policies and concerns of adjacent counties and regional agencies, such as the Association of Bay Area Governments, the Metropolitan Transportation Commission, the San Francisco Bay Conservation and Development Commission, the Bay Area Air Quality Management District, the Northern Sonoma County Air Pollution Control District, the Bay Area Water Quality Control Board, the North Coast Regional Water Quality Control Board, the Sonoma County Water Agency, and others. The text of the various elements notes those situations where these agencies have particular responsibilities that affect the physical development of the County and approval of permits.