Staff has prepared this Annual Progress Report (Report) to update the Board of Supervisors on the status of implementing the programs contained within the Sonoma County General Plan and to comply with State Law. California Government Code Section 65400(b)(1) mandates that the County Planning Agency prepare and transmit this report to the Governor’s Office of Planning and Research (OPR) and the Department of Housing and Community Development (HCD). The Report is required to contain certain housing information, including the County’s progress in meeting its share of regional housing need and local efforts to remove governmental constraints to the development of housing.

Government Code Section 65300 requires every city and county to prepare and adopt a “comprehensive, long term general plan for the physical development” of the community. On September 23, 2008 the Board adopted the current General Plan (commonly referred to as GP2020) and adopted the current Housing Element on December 2, 2014. The Government Code also requires that these plans include seven mandatory elements: Land Use, Circulation, Noise, Open Space, Conservation, Safety, and Housing. GP 2020 includes these mandatory seven elements and four additional, optional elements: Water Resources, Air Transportation, Agricultural Resources, and Public Facilities and Services. Notably, Sonoma County was the first jurisdiction in California to adopt a Water Resources Element. Each of these elements contains a set of goals, objectives, policies, and programs.

The broad purpose of GP2020 is to “express policies which will guide decisions on future growth, development, and conservation of resources through 2020 in a manner consistent with the goals and quality of life desired by the County’s residents.” GP2020 provides policy direction to multiple departments and jurisdictions beyond the Permit and Resource Management Department (Permit Sonoma). The attached spreadsheet (Attachment 1) summarizes the implementation efforts of all General Plan programs, including the responsible department and estimated completion date. Below is a list of notable accomplishments completed in 2018.

Overall progress continues with the implementation of General Plan programs. The 2014 Housing Element contains 57 programs, many of which are ongoing or underway. The County has initiated several new programs. Changes in the percent of General Plan programs completed since 2014 are a result of the new Housing Element programs. Of the 166 General Plan programs 120 have been implemented or are ongoing programs implemented on a continuous basis. Another 19 programs are either partially complete or currently underway (see a description of major initiatives underway, below). An additional 22 programs have not been started, and a small number of programs are on hold for a variety of reasons. Attachment 1 provides a detailed description of the General Plan Implementation Programs for the following elements: Agricultural Resources, Air Transportation, Circulation and Transit, Land Use, Noise, Open Space and Resource Conservation, Public Facilities and Services, Public Safety, Water Resources, and Housing. Table 1 and Figure 1 provide a summary of implementation progress. 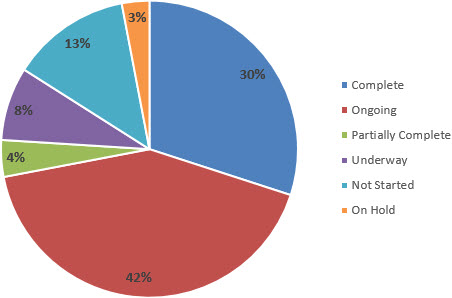 Multiple programs are in the process of being implemented by Permit Sonoma as part of the Comprehensive Planning Work Plan. Permit Sonoma also works collaboratively with other departments such as Transportation and Public Works and Regional Parks to implement General Plan policies and programs. Below is a list of major planning efforts that were completed or underway in 2018.

The Local Coastal Plan is a separate, stand-alone plan for the coastal zone, mandated by the California Coastal Act. The Local Coastal Plan Update is a focused update limited to integrating General Plan 2020 policies and addressing public access; adaption to climate change, particularly sea level rise; biological resources; public safety (geologic, flood hazards, and coastal erosion); and water quality. In 2017, Permit Sonoma staff worked on revising the Preliminary Draft to respond to comments from the public and Coastal Commission. The Draft Local Coastal Plan is planned to be published in the summer of 2019, and commence public hearings thereafter. Once adopted by the Board of Supervisors, the Local Coastal Plan must be submitted to the Coastal Commission for certification before it becomes effective.

Permit Sonoma Planning Staff has been working with the Sonoma County Transit Authority (SCTA) to implement a comprehensive update to the County’s traffic model. Permit Sonoma has provided SCTA with new baseline and projection land use data in order to update the model to a baseline year of 2015, and in order to update model forecasts of housing and employment growth. Permit Sonoma Staff is currently working with SCTA in executing a technical update to the traffic model in preparation for the implementation of recent changes in state law (SB 743) which require the use of vehicle miles traveled as a measure of project CEQA impacts. This technical update includes improvements that will allow the analysis of weekend travel, improve model estimates for travel beyond county boundaries, improve the travel model’s ability to estimate winery, agricultural, and visitor related travel, and to provide tools to streamline VMT estimation.

The County was awarded a grant from the Metropolitan Transportation Commission to develop an area plan for the Springs community. This plan will guide development and gradually shape the Springs into a more vibrant and sustainable pedestrian-oriented community. The Springs Specific Plan will implement many transit and circulation policies of the General Plan and will also include community design features to promote healthy living in the communities of the Springs. The County is committed to engaging the community in the development of the Specific Plan and, therefore, initiated this planning effort by forming a Community Advisory Team (CAT). The CAT serves as a liaison to area residents, businesses, and organizations and provides input on the plan.

Four community workshops have been held to provide project information and receive public input. The CAT and Technical Advisory Committee have also met to review background reports and project alternatives, and to identify potential issues. The Bicycle and Pedestrian Advisory Committee and the Sonoma Valley Citizens Advisory Committee have both reviewed the draft plan. The draft Specific Plan and draft EIR will be available for public review this Spring. Public hearings before the Planning Commission are anticipated before the end of 2019.

The County was awarded a grant from the Sonoma County Transportation Authority to update the Airport Area Specific Plan, including a Station Area Plan for the new Sonoma Marin Area Rail Transit (SMART) station. The goal of this effort is to transform the car-centric land use model into a transit-oriented employment center with the new SMART station as the central component. The project includes a robust community process to develop the area with a mix of land uses and enhanced multimodal connectivity to promote healthy living and greenhouse gas reduction by encouraging active forms of transportation and increased use of transit. The Draft Specific Plan is scheduled to be released for public review by the summer of 2019.

In 2016, the Board of Supervisors provided direction to establish a regulatory framework for cannabis operations consistent with the California Medical Cannabis Regulation and Safety Act (MCRSA). The land use ordinance was adopted December 20, 2016. Permitting began in July 2017 for the full cannabis supply chain.

In October 2018, the Board of Supervisors passed an update to the Cannabis Ordinance, focusing on minimum parcel sizes, setbacks, permit term extensions, propagation area, and new permit/license types. This update, Part 1, was the first of two updates. Part 1 had limited scope focused on neighborhood compatibility issues and aligning the Ordinance with state law where appropriate. Part 2 will include a more thorough review of neighborhood compatibility and other implementation efforts that require robust outreach and staff analysis. Part 2 is expected to kick off in late 2019 or early 2020, as the County wants to focus on the permitting process. Currently, there are over 130 open applications; a total of 35 permits have been issued.

Development Code Modernization represents the first major reorganization of the County’s Zoning Ordinance since the 1960s and will include new definitions and land use types that reflect contemporary planning. The new format will be consistent with many newer, more user-friendly code formats used in local cities. The updated Code will feature allowable land uses for each zoning district reformatted into easy-to-read tables; terms and permitting levels; and a new Permits and Procedures Chapter consolidating the various procedures currently listed throughout the Code. Staff are actively developing these materials and intend to produce a public review draft by fall of 2019 and commence the Planning Commission’s review.

The County is required to report certain housing information in accordance with State Housing Element Law (Government Code Sections 65583 and 65584) and the State HCD’s guidelines for reporting the County’s progress toward meeting its regional housing needs. The Association of Bay Area Governments has adopted a Regional Housing Needs Allocation (RHNA), pursuant to Government Code Section 65584, for all jurisdictions within the County of Sonoma, including the unincorporated County, to provide housing for the projected population growth within the region for the 8-year period between 2015 and 2023. This report includes reporting on extremely low income units, but not units destroyed in the 2017 Sonoma Complex fires and rebuilt.

Subsequent to the 2017 annexation of Roseland into the City of Santa Rosa, the Association of Bay Area Governments (ABAG) approved a proportionate transfer of RHNA allocation from the County into the City, decreasing the County’s RHNA obligation and increasing the City’s obligation by the same amount. The County’s revised RHNA obligation, along with its revised progress in meeting its regional needs, are set forth in Table 2, below.

The County’s RHNA is relatively low, in part because the trend is toward city-centered growth, and away from development in the rural portion of the unincorporated county.

It is important to note, however, that the Regional Housing Need is a calculated minimum number of housing units that a jurisdiction must zone adequate land for and does not accurately reflect actual housing needs, which are much greater. After the loss of 2,216 housing units to the Sonoma Complex fires in October 2017, the County’s housing needs are acute.

The County issued permits for 219 units. This total includes 3 permits for farmworker bunkhouses totaling 57 bunks, which are not counted as part of regional housing need.

Sonoma County General Plan 2020 continues to provide a broad policy framework for city-centered growth in the County, and the 2014 Housing Element programs continue to effectively address housing needs during 2018. Although rebuilding efforts are accelerating, the County’s Regional Housing Need does not accurately reflect the increased housing needs due to the fires in 2017.

In 2019, the County will focus on implementing Housing Element programs, Development Code Modernization, and completing the Local Coastal Plan update and two Specific Plans that are currently underway.